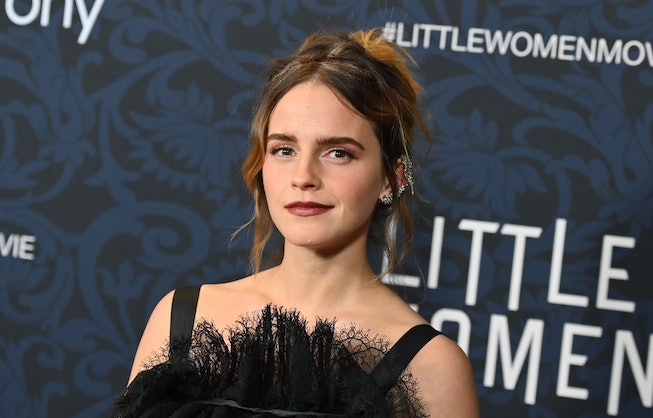 Turns out the best retirement plan is landing a lead role in a lucrative children's book adaptation franchise. Emma Watson is doing just that — and reportedly taking her Harry Potter money and retiring from acting at the age of 30.

Per the Daily Mail, Watson’s agent said she is “dormant” from her career and won’t be taking on any new projects for the foreseeable future. Her last major role was in Gret Gerwig's Little Women, in which she played Meg March. Watson's experience with Little Women was bumpy. Fans of the film teased the actress over her mediocre American accent online, while Watson allegedly refused to join her fellow cast mates— Saoirse Ronan, Florence Pugh, Eliza Scanlen, Laura Dern, Timothée Chalamet and Meryl Streep— on the press tour and only attended the movie’s premiere.

Prior to Little Women, Watson starred in the film adaptation of The Perks of Being A Wallflower, Sofia Coppola's ode to Hollywood thievery Bling Ring, and most famously, as the bookworm witch who routinely saves her two idiot friends, Hermione Granger, in the Harry Potter films.

Page Six notes that Watson may be taking indefinite time off to spend more time with her alleged fiancé, fin-tech CEO Brendan Wallace.