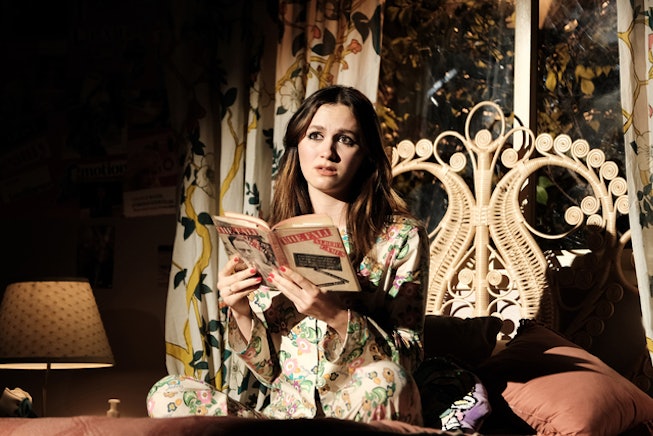 In the seventh episode of Euphoria’s increasingly popular second season, Lexi Howard, once a side character, finally takes center stage. Taking matters into her own hands, the long-sidelined sister of main character (and recent best-friend-cum-boyfriend-stealer) Cassie steps into the spotlight as she takes on the role of writer, director, and star for a huge school play based on her own life, as well as those of her sister and friends — all of whom conveniently have had more attention paid to them in past episodes of this popular HBO series.

It all makes for a thoroughly enjoyable episode of Euphoria (the season’s best, if you ask me), cleverly taking advantage of its hyper-meta conceit to comment on Euphoria as a whole. And if that wasn’t meta enough for you already: the play-within-a-show was partially inspired by a play Maude Apatow (the actress who plays Lexi) put on in her actual high school theater program.

In a recent interview with Variety, Apatow reflected on her spotlight episode — wittily titled “The Theater and Its Double” — admitting that it was both fun and challenging to film. “It took a long time to film that sequence because it was so complicated,” she said about her experience shooting the play. “There were a lot of audience shots to consider [and] Sam had to make sure that the shots in the play connected to real memories and they had to be perfectly timed and interwoven.”

But the real kicker came later. Since its start in 2019, Euphoria creator Sam Levinson has controversially upheld a rather infamous reputation as the show’s sole writer. Despite this, though, Apatow admitted that her episode, in particular, was more of a “semi-collaboration” with the frequent director. Going even further, The King of Staten Island actress revealed that the entire play storyline was semi-plucked from her own theatrical history. “It was loosely inspired by my high school play that I produced,” she told the magazine, noting that she hasn’t really done live theater since then. (Of course she hasn’t — not when everyone from Lena Dunham to Ryan Murphy is knocking on your door for TV work.) “Everyone in the theater department hated me, but I really wanted to do a good job.”

Though Apatow concedes that putting on a big, soul-baring play may seem slightly out of left-field for a character that had previously been defined by her shy introverted nature, the actress tells Variety that her character’s decision to do so now still makes sense in context. According to Apatow, Lexi’s self-created production provided the character with a sense of control that she may have been lacking in other key areas of her life. Putting on this play about herself and her peers gave her a sense of purpose she couldn’t find anywhere else.

Though Apatow had yet to see the final product when Variety spoke with her about the episode, she did feel confident that she and her castmates ultimately pulled off something really special, telling the magazine, “We felt really good about it in the moment.”

Check out a clip from Lexi’s play below.

The season two finale of Euphoria airs next Sunday on HBO and HBO Max.