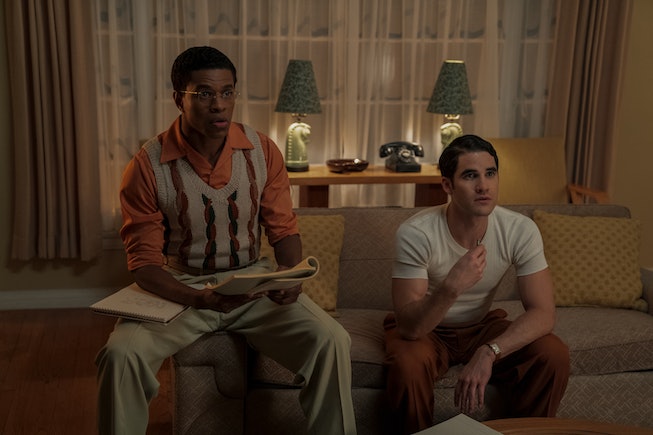 Another month means a whole new batch of TV shows and movies for you to dive into on Netflix. And with quarantine still going strong, the streaming service is more aware now than ever how desperate we are for more distractions. Thankfully, they have used this information for good, and in May, they will deliver over 100 new pieces of content — including feature films, documentaries, dramas, comedies, standup specials, interactive episodes, and even a live concert courtesy of The Politician's Ben Platt.

Among the new TV offerings are Hollywood, Ryan Murphy and Janet Mock's new miniseries that reimagines Hollywood's Golden Age; the second season of Christina Applegate and Linda Cardellini's dramedy Dead to Me; Oscar winner Damien Chazelle's jazz club musical miniseries The Eddy; Spanish-language dramedy Valeria, which appears to share some crucial DNA with ensemble classics like Girls and Sex and the City; Kimmy vs. The Reverend, the upcoming Unbreakable Kimmy Schmidt interactive special; The Big Flower Fight, a reality competition series for florists and sculptors; and Space Force, the next comedy team-up to emerge from the minds of The Office creators Steve Carrell and Greg Daniels. On the other hand, if you're desperate for some new standup comedy in your life, get ready for 23 Hours to Kill, Jerry Seinfeld's latest special, and Douglas, the new special from Nanette wunderkind Hannah Gadsby.

For the cinephiles out there, Netflix is blessing us with the first and second Back to the Future (but not the third); the original 1971 classic Willy Wonka and the Chocolate Factory, as well as its modern reimagining starring Johnny Depp, Charlie and the Chocolate Factory; Judd Apatow's hilarious Fun with Dick and Jane, which stars Jim Carrey and Téa Leoni as a formerly wealthy couple pushed into crime; the triple Oscar-winning classic The Curious Case of Benjamin Button; Kate Beckinsale's Underworld trilogy; The Half of It, a new queer coming-of-age story from the mind of Alice Wu; and The Lovebirds, a rom-com starring Issa Rae and Kumail Nanjiani that was originally slated to debut in theaters earlier this month but couldn't because of COVID-19.

See everything coming to the streaming service in May below.