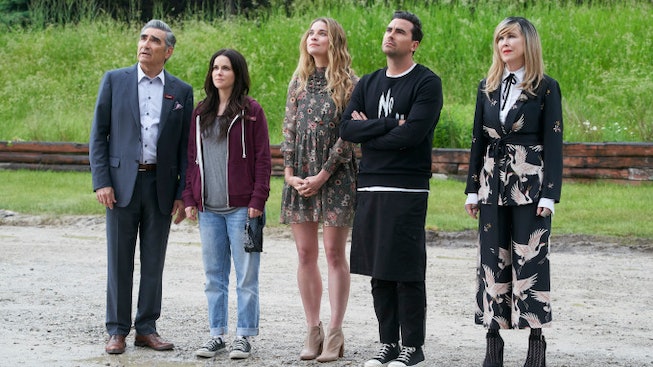 Unless you've been living under a rock — and you'd be forgiven for doing so in these trying times — odds are you've heard about the huge night Schitt's Creek had three days ago when the once-under-watched Pop TV sitcom broke multiple records for the nine Emmys it won for a single season. Though the critically-acclaimed comedy had been making insiders hysterically laugh for years, Schitt's Creek didn't actually get Emmy recognition until its penultimate fifth season (nabbing four nominations, including one for Outstanding Comedy Series) and didn't actually win anything until its final sixth season — when it completely swept. If that success has you anxiously awaiting for the streaming arrival of this heartwarming comedy's final season, you're in luck, since Schitt's Creek season six now has an official Netflix release date: Wednesday, October 7th.

Given its Canadian origins, it shouldn't surprise you too much that Schitt's Creek really gained an audience once it landed on Netflix. Even Dan Levy, who created and stars in the show alongside his father Eugene Levy, is quick to admit that his show would have never blown up to become the cultural juggernaut it is today without the boost it got from being exposed to a much broader, international audience. So while hardcore fans may have tuned in weekly to catch episodes as they aired live earlier this year and Hulu with Live TV subscribers may have caught up with the season already, a great deal of Schitt's Creek fans will be waiting for it to premiere on Netflix, where it will be easily accessible to all. (If you don't have a Netflix account, however, don't fret. Beginning October 2nd, Comedy Central will air all six seasons of the beloved sitcom in five-episode chunks every Friday.)

As many people will tell you, the final season of Schitt's Creek tugs on the heartstrings even harder than this typically-sentimental comedy has done in the past. As the entire gang prepares for David's (show creator Dan Levy) big wedding to Patrick (Noah Reid), each member of the Rose family is forced to confront uncomfortable truths about their own attachments to each other. No matter how dysfunctional this family may seem on the surface, this season proves that, in the end, they love each other more than anything else. Though the show will certainly make you laugh uncontrollably, don't be surprised if it brings you to (happy) tears just as frequently.

Check out a trailer for the sixth season of Schitt's Creek below. (And don't forget: A movie could be coming...)