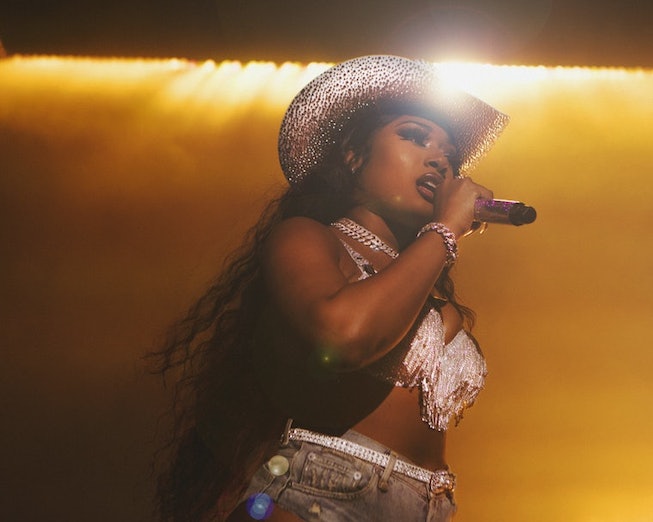 Megan Thee Stallion is having a very interesting moment right now. On the one hand, she's at the top of her game — after releasing her raunchy Cardi B collaboration "WAP" just over two weeks ago, she now sits at the top spot of the Billboard Hot 100, less than three months after occupying that same spot for her Beyoncé-assisted remix of "Savage."

But on the other hand, she's been in recovery from being shot multiple times in both feet, an incident that has sadly led to critiques against Megan for either lying (which she felt pressured into providing evidence against) or, most recently, for confirming that her assailant was indeed rapper Tory Lanez. Nevertheless, the preternaturally joyful rapper has chosen to celebrate her wins rather than mourn her losses — and, this week, she will be doing so with a virtual concert.

Presented by LiveNation, the "livestream performance" will last for an hour, feature no audience, and will broadcast simultaneously for everyone with a ticket. As of now, there are no specific details about what to expect from the sure-to-be legendary virtual event, but one can safely assume that the beloved rapper will perform renditions of her current hit singles "WAP" and "Savage," as well as some past hits, like "Big Ole Freak," "Cash Shit," and the Nicki Minaj and Ty Dolla $ign-featuring "Hot Girl Summer." Her latest solo single, "Girls In the Hood," is also bound to find its way onto the setlist.

Tickets for the virtual show are $15 each and are available for purchase here.

NEXT UP
Culture
Phoebe Dynevor Will Not Return for Bridgerton Season 3
Culture
Succession Season 4 Trailer Explodes With Family Drama
Culture
The Biggest Revelations From The Price Of Glee Docuseries
Beauty
Megan Fox Is Completely Transformed By A New Blonde Bob
Style + Culture, delivered straight to your inbox.