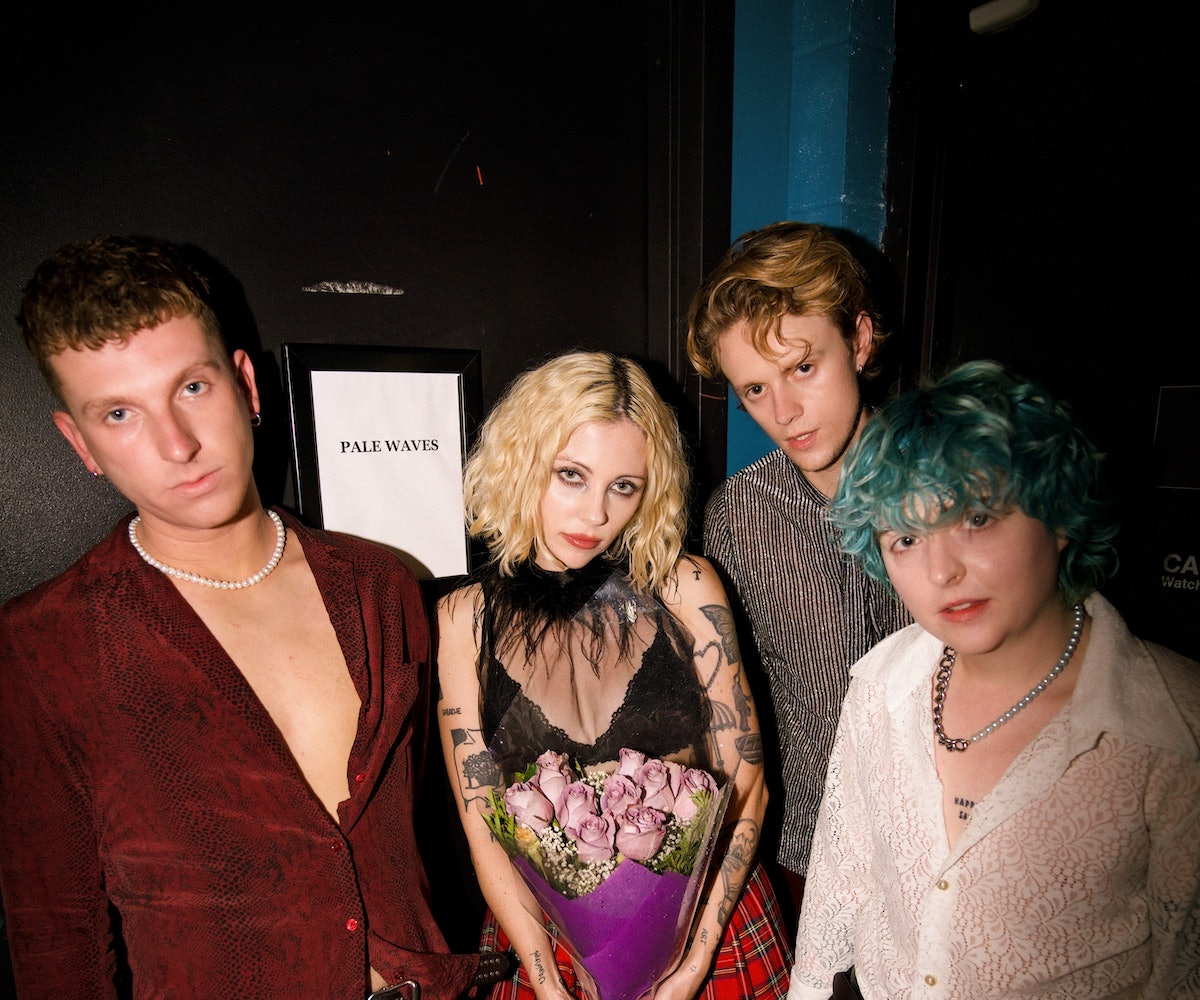 The only thing that hits harder than Pale Waves’ fizzy, punk-tinged pop, is their style. Since their debut in 2018, the U.K.-based four-piece, who’s signed to the same acclaimed label as The 1975 and Rina Sawayama, has become as equally known for their driving, sweet-yet-grunge music, as they have for their impeccable fashion sense. Composed of vocalist Heather Baron-Gracie, drummer Ciara Doran, guitarist Huga Silvani, and bassist bassist Charlie Woods, the band has proven that if you want to be treated like rockstars, you have to dress the part.

Over the years, Pale Waves has experimented with different fashion styles to accompany their explosive pop-rock music. In 2018, for their record My Mind Make Noises, the group was a vision of gothic glam as they punctuated their vibrant pop songs with heavily lined eyes, obsidian lipstick, platform boots, and almost exclusively all-black outfits. With their latest album era, Unwanted, they’ve reintroduced color and are throwing it back to the glam-rock hey day, incorporating glitter, sequins, shimmer, and intentional sleaze into their fashion choices.

At the band’s Sept. 19 show in New York City at the Bushwick venue Elsewhere, Baron-Gracie looked every bit like pop-punk royalty as she took the stage in shiny red patent leather Naked Wolfe boots and a sheer black blouse from STYLAND, which she styled with a black lacy bra and a red plaid school girl mini skirt.

“I always start by putting my make-up on first,” Baron-Gracie tells NYLON of her getting ready routine. “I set up a little make up station wherever I can in the dressing room and then put my face on. Then I’ll pick out an outfit and probably change my mind like five times and then once I’ve finally found the one and I feel psychically ready I prep myself mentally. I either walk off by myself and do a little meditation or I’ll listen to some heavy music to get me hyped up. Then, lastly, I do a vocal warm up. Everyone in the band warms up on their instruments besides Charlie because he’s just naturally a pro and he’s usually busy popping a bottle of Prosecco instead! We love a party king.”

Cant play a show without my essential, lipstick! My go-to is the Gucci Rouge high shine lipstick.

As a younger band, the members are wholly in charge of getting themselves ready for the show each evening, taking the opportunity while they’re on the road to shop and thrift new finds to add to the rotation throughout their tour.

“[I’m always looking for] something dramatic and chic,” Baron-Gracie says of how she picks her on stage outfits. “It usually depends on how I’m feeling in general. Sometimes I can be feeling quite smart so I’ll pick out a cute blazer with a skirt. Other times I feel more casual so I’ll pick out a cute corset and skirt with a dramatic boot. I try to get everyone in the band to somewhat coordinate because I love it when everyone looks cohesive and everyone’s overall look works with one another.”

Baron-Gracie’s make-up routine has also changed drastically since her days of heavy-lining and smoking out her eyes with black eye-liner and eyeshadow.

“My favorite fashion trend right now is the ‘90s brow making a come back,” she says. “After years of having bushy brows myself I recently hopped on the trend and wow I’m never going back! I realized at least (I think) that the thin brow complements my face shape a lot more.”

While getting ready for the show, Pale Waves took NYLON behind the scenes. Read on for more.

We all love fashion and love finding rare pieces on the road. Whenever we get the opportunity we go shopping. Both Charlie and Hugo’s shirts were found at vintage shops on our last tour.
I always love to combine a skirt and some dramatic boots. This show I chose to wear one of my favorite tops by STYLAND. Someone in the crowd gave us these flowers. One of the best parts about touring is getting to meet the people that come to the shows.