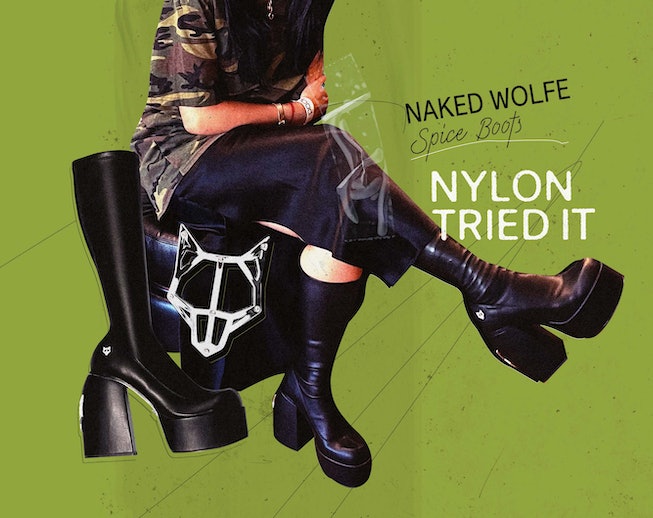 There are TikTok-famous items and there are celebrity “It” items, and sometimes a certain fashion piece checks both of those boxes. The latest to achieve such a status? Naked Wolfe’s Spice boots, a pair of black platforms easily recognized for its sculptural heel and metal logo emblem. The ‘90s-inspired style has become a hit among Gen Z and the Hollywood set, including Hailey Bieber, Kourtney Kardashian, Charli D’Amelio, and more. At the beginning of 2022, global fashion shopping platform Lyst named it the hottest women’s product, taking the top spot over the viral Miu Miu micro-mini skirt and UGG’s classic mini boot.

The brand itself has only been around since 2017, which means that Naked Wolfe managed to create a bestselling item in less than five years — that’s no easy feat for any new business. But the sky-high style struck a chord among shoppers, most likely because of the comeback of going-out dressing over the past year and, of course, the help of TikTok. According to Naked Wolfe co-founders Cooper and Bronte Mance, the family-run brand didn’t even have an account on the social media platform when the boots first took over For You Pages towards the end of 2021. Currently, the #nakedwolfe hashtag on TikTok boasts 128.8 million views.

At the time, Naked Wolfe was selling more than 5,000 pairs of its Spice boots per week online. Supply chain issues and restock pressure required the Mances to fly in extra pairs every week just to keep up with the demand. Now, the brand has hit its stride and the $350 boots are easily available for purchase. (Though, many competitors have created their own dupes of the hit item.)

I was able to snag a courtesy pair of Spice boots from Naked Wolfe to give it a spin during one of my night-out adventures. My first thought was, what the hell was I going to wear with them? Luckily, there were loads of TikToks, Pinterest photos, and Instagram ‘fit pics to give me outfit inspiration. My plans (rooftop drinks at sunset) didn’t exactly seem fitting for a mini skirt, and covering up the boots with a pair of pants felt like a missed opportunity to show them off. (Aesthetically, I’m not a fan of the large plaque on the back of the heel, in addition to the tiny wolf logo on the side, but I totally get the importance of brand awareness. Red-sole shoes are a thing because of Christian Louboutin, right?) I already felt somewhat over-the-top wearing the boots for the first time ever, so I ultimately went for a long slip skirt with a slit that I paired with a baggy tee to keep my look more laid-back.

As most of the viral TikToks have stated, putting these bad boys on felt like an extreme sport, thanks to the stretchy but skin-tight upper that hugs your calves. After some bending, hovering, and pulling, along with the occasional cramp, the boots were on and I was ready to hit the road. I walked around my apartment first to see if they would trigger any immediate discomfort — sadly, some high shoes do that for me — but I’m pleased to report that they were enjoyable to wear and walk around in. Over time, however, I did feel my feet starting to give in, so I’d suggest adding an extra insole for more cushion if you can.

As someone who rarely wears anything beyond flats and would rather choose comfy sneakers over heels, I was a bit hesitant about dipping my toe back into five-inch-platform waters. But I was pleasantly surprised that the Spice boots were a huge help in easing me into the nostalgic style again. Have I worn them more since? Not really, but I know with some mental prep to put them on and some fun plans to wear them out, I’ll instantly go for the pair to finish off my outfit. But are they worth the hype? If you’re still on the hunt for black platform boots, then I would say this is an easy and obvious choice to cop now.