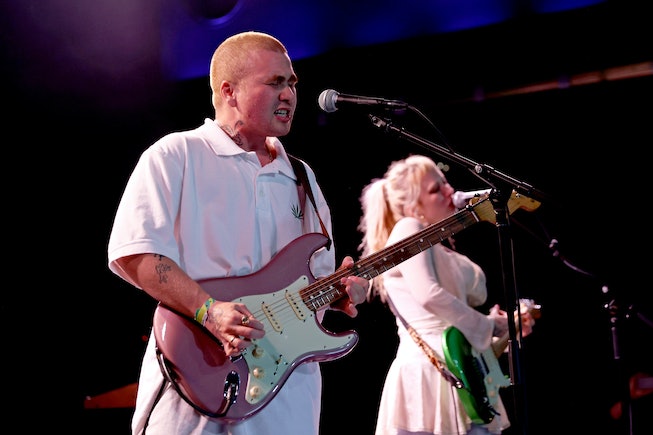 For the first 30 minutes of Girlpool’s show at Elsewhere on Thursday night, the last show they will play as Girlpool in New York City, Avery Tucker and Harmony Tividad couldn’t hear each other onstage.

Of course, that didn’t stop them from performing bring-you-to-tears harmonies they could sing in their sleep. But it did help explain the jittery feeling in the air.

“Just so you know, we can’t hear each other onstage,” Harmony eventually explained to a crowd that hung onto her every word, whether she was talking about recently seeing Lea Michele in Funny Girl or making a joke about covering a Bee Gees song.

While Elsewhere, a multi-warehouse space in Brooklyn’s Bushwick neighborhood, is said to be a less than ideal venue for performers, I couldn’t help but wonder why they didn’t just fix the sound. It wasn’t the only time the show felt a bit scrambled: Songs would end sharply, as if neither Avery nor Harmony wanted the last chord to ring out.

It felt antithetical to what Girlpool is about, which for many of us, is about soaking in the intoxicating depths of our feelings, no matter how confusing or unpleasant they are. “I love their sad stuff,” a fan in the front row told me as the duo was taking the stage. “Their rock stuff is great too, but I’m here for their sad stuff.”

The show’s ending felt as abrupt as the band’s breakup last month. Girlpool closed with “Before The World Was Big,” sung in a gorgeous, snarly round, before Harmony and Avery ran offstage for a few minutes only to run back onstage to tell us that Elsewhere said they don’t have time for an encore. There was a small encore chant by the crowd that quickly died out as everyone realized they really weren’t going to do another song. People were quickly rushed out, an anticlimactic ending to a show that was tasked with doing so much.

“It’s not even a friendship. It’s more than that. The love that they have is very beautiful.”

But despite a reluctance to let those last moments extend, Girlpool did feel plenty throughout their set.

One of the things that makes seeing Girlpool live so special is that they turn up the feelings knob: Their screams are more guttural, their notes are held for longer, and Avery especially loves to play a guitar so hard they knock it out of tune.

But any Girlpool fan will tell you the best thing about seeing them live is their telepathic, twin-like chemistry at play. After the first few songs, the backing band went offstage, leaving Avery and Harmony to do what they do best: hear each other.

“Alright Harmy,” Avery said. “You can hear me now. It’s you and me. Just us,” prompting an audible “aww” from the audience.

They whisper things to each other, they press their foreheads together, guitars nearly kissing, they tell stories about going to parties at the Chainsmokers house, or the Coca-Cola factory. At Thursday’s show, Avery had a rant about the kids meals at Quiznos. “It’s like a podcast,” my plus-one whispered to me. “They love to gab,” I told her.

In March, I went out with Avery and Harmony and we chatted for three hours about everything, from toxic relationships to Dippin’ Dots. The best moments of the show were the most colloquial, when it felt like we were just lucky witnesses to Avery and Harmony’s friendship, while happening to have our own personal little therapy breakthroughs. It’s easy to put unfairly high expectations on a show that is going to be their last in New York City, but Girlpool always feels at its best when everyone is just hanging out — though you did see more camera phones than usual raised with the reverence of a priest with the Eucharist when the first notes of “Cut Your Bangs” were strummed.

“Did I cry? Yes,” a fan named Aley told me as we were being shuffled out of the venue, before apologizing for being stoned. “I’ve been listening to ‘Cut Your Bangs’ since I was 15.”

“I’ve seen Girlpool since they were 15 or 16 years old,” a fan named Ellis told me outside the venue while waiting for a car. “I am very emo. I think I’m gonna go home and cry and listen to all of their albums. I’m really sad, but honestly their music is beautiful and I think if they go separate ways and make their own music, I have faith they will be successful because of how talented they are.”

“Give it 40 years,” their friend piped in, nodding towards a possible reunion.

“It’s not even a friendship,” they continued. “It’s more than that. The love that they have is very beautiful.”