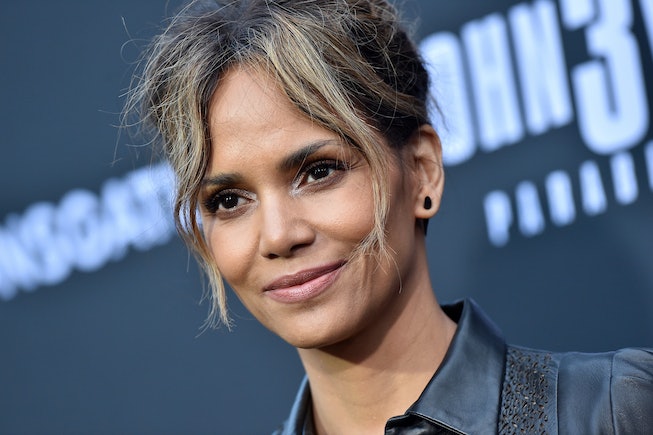 It's only been a year, exactly, since Scarlett Johansson was dragged to hell and back for defending her right to play Dante "Tex" Gill, a trans man and massage parlor owner whose story was, at one point, going to be at the center of the since-canceled Rupert Sanders film Rub & Tug. (If you recall, that controversy eventually led to the now-iconic moment when Johansson said she should be able to play any tree that she wants.) So why, so soon after that controversy, was fellow A-list actress Halle Berry making this same mistake by also considering an offer to play a trans man in a different film? Naturally, the backlash was swift. But unlike Johansson, Berry's decision to drop out was equally swift, and she has now apologized for ever even contemplating taking on the role.

The controversy began last Friday, when Berry participated in an Instagram Live chat with hairstylist Christin Brown. When talking about future work, Berry noted that she had been in discussion about "a character where the woman is a trans character, so she’s a woman that transitioned into a man. She’s a character in a project I love that I might be doing." Claiming that she really wanted to take a “deep dive” into “that world” of the trans community, Berry continued, “Who this woman was is so interesting to me." In the same interview, she said, “It’s really important to me to tell stories, and that’s a woman. That’s a female story. It changes to a man, but I want to understand the why and how of that.”

But after spending the weekend mired in backlash from members of the trans community and their allies, Berry took to Twitter last night to apologize. "Over the weekend I had the opportunity to discuss my consideration of an upcoming role as a transgender man, and I'd like to apologize for those remarks," her statement began. "As a cisgender woman, I now understand that I should not have considered this role, and that the transgender community should undeniably have the opportunity to tell their own stories."

In the final paragraph, the Oscar winner concluded, "I am grateful for the guidance and critical conversation over the past few days and I will continue to listen, educate and learn from this mistake. I vow to be an ally in using my voice to promote better representation on-screen, both in front of and behind the camera."

While Berry's apology arrived much quicker (and with much more grace) than Johansson's, many have found it important to note that, even in her apology, Berry failed to acknowledge her frequent misgendering of the character she was going to get paid to play. While Berry continuously says her character was a trans man, she also used feminine pronouns when describing him, while also referring to him as a "woman" and his story as a "female story," as if his current lived identity had no bearing on how Berry planned to approach his character. By doing so, Berry unknowingly provided a very simple example of why cis actors will never be able to approach trans characters with the same level of authenticity that trans actors themselves could.

Now, my only hope is that Halle Berry and Scarlett Johansson are able to meet up with each other for a movie night where they watch the Laverne Cox-produced documentary Disclosure. It lays out nicely, and with great detail, why casting cis actors in trans roles can be so potentially harmful.