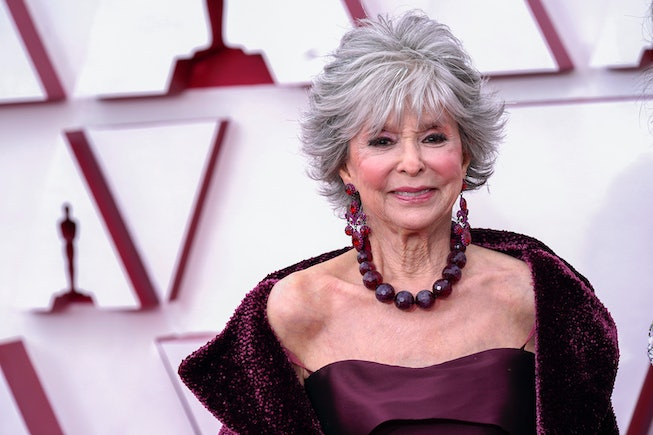 In The Heights, the highly anticipated movie musical adapted from Lin-Manuel Miranda’s hit Broadway play, has sparked a conversation about colorism — a practice that favors light-skinned people over those with a darker complexion — in Hollywood. While the film, which hit theaters and streaming over the weekend, received glowing reviews from critics, many Latinx viewers expressed their disappointment in its casting.

Critics of the film’s casting point out that In The Heights takes place in Washington Heights, a historically Afro-Latinx neighborhood in New York City. Per the synopsis, the film follows a bodega owner with a shop in the center of a “vibrant and tight knit community” who “hopes, imagines, and sings about a better life.” Anthony Ramos, a Puerto Rican-American actor, was aptly cast as the lead. But, as many have pointed out, the rest of the ensemble lacks the diversity that Washington Heights is known for.

Felice Leon, a video host for The Root, recently echoed the public's concern in an interview with the film’s director, Jon M Chu, along with some members of the cast. During the interview, she asked Chu what the internet is begging to know — why is In The Heights so white?

Below, an explanation of the controversy and what’s been said so far:

What has director Jon M Chu said about colorism in In The Heights casting?

During the interview, Chu claimed the filmmakers did have a conversation about representation. “That was something we talked about, and I needed to be educated about, of course,” he told Leon. However, he stood by his casting decisions, saying, “In the end when we were looking at the cast we tried to get the best people who were best for those roles specifically.”

Chu was also recently asked about colorism in the casting of his hit 2018 film Crazy Rich Asians, which was also criticized for its white-passing cast.

Has Lin-Manuel Miranda weighed in?

Miranda, who famously created Hamilton, wrote the original stage musical In The Heights, and produced the film adaptation. He addressed the colorism issue in a note posted to social media on Monday, June 14, writing in part, “I started writing In The Heights because I didn’t feel seen. And over the past 20 years all I wanted was for us — ALL of us — to feel seen. I’m seeing the discussion around Afro-Latino representation in our film this weekend and it is clear that many in our dark-skinned Afro-Latino community don’t feel sufficiently represented within it, particularly among the leading roles.

“I can hear the hurt and frustration over colorism, of feeling still unseen in the feedback,” he continued. “I hear that without sufficient dark-skinned Afro-Latino representation, the work feels extractive of the community we wanted so much to represent pride and joy. In trying to paint a mosaic of this community, we fell short. I’m truly sorry.”

What did Rita Moreno say?

The 89-year-old Puerto Rican actress and EGOT-winner Rita Moreno, who won an Academy Award for her portrayal of Anita in 1961’s West Side Story, brought up the controversy during an appearance on The Late Show on Tuesday, June 15. Speaking to Stephen Colbert, Moreno said that she was bothered by the backlash to In The Heights. “It’s like you can never do it right,” she said. Moreno then expressed her appreciation for Miranda — specifically, his ability to bring “Latino-ness” and “Puerto Rican-ness” to America — and said she wished that people would just “leave it alone.”

“This is the man who literally has brought Latino-ness and Puerto Rican-ness to America. I couldn’t do it,” she said. “I mean, I would love to say I did, but I couldn’t. Lin-Manuel has done that, really single-handedly, and I’m thrilled to pieces, and I’m proud that he produced my documentary.”

“There’s a lot of people who are Puertorriqueño, who are also from Guatemala, who are dark and who are also fair,” she added. “We are all colors in Puerto Rico.”

What was the casting process like for In The Heights?

Melissa Barerra, the actress who plays lead Vanessa, told Leon that the audition process for In The Heights was rigorous and full of diverse candidates.

“There were a lot of Afro-Latinos there,” she said, “A lot of darker skinned people.” However despite the plethora of choices, she defended the casting outcome and claimed it was based purely on talent. “I think they were looking for just the right people for the roles. For the person that embodied each character in the fullest extent,” she explained.

What has the rest of the In The Heights cast said?

While not everyone has spoken publicly about the issue, Leslie Grace, an Afro-Latina woman who plays Nina, spoke to Leon about colorism as well — albeit in a broader sense. “I didn’t realize until making this movie that I didn’t really get to see myself or people that looked like my siblings, that are darker than me, on screen,” she said.

Grace shared her hope that In The Heights will create opportunities for others in the future. “I do hope that this is cracking that glass ceiling,” she said. “Because I do hope to see my brothers and sisters that are darker than me lead these movies.”

Are there any Afro-Latinx characters in In The Heights?

During The Root interview, Chu asked Leon if she noticed the film's diverse musical numbers, seemingly trying to make up for the lack of representation they discussed. Barerra did the same, saying, “Jon and Lin wanted the dancers and the big numbers to feel very truthful to what the community looks like.”

However, Leon doubled down on her stance, explaining that those “efforts” are a part of the larger issue at hand.

Though their conversation illuminated a deep-rooted issue within Hollywood, some loved the film despite the casting controversy, while others did not notice at all. Head to HBO Max to watch In The Heights and decide for yourself.