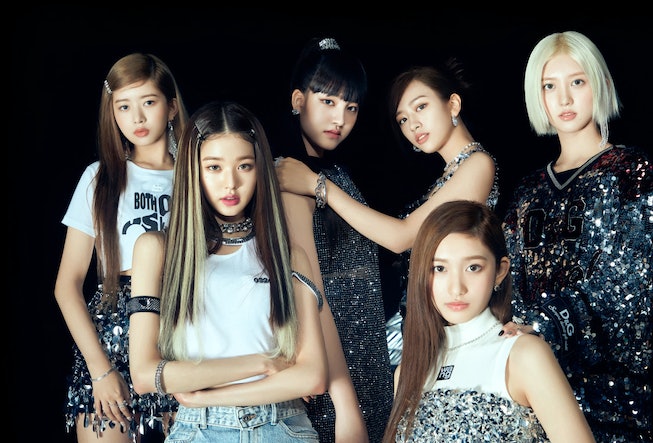 Korean girl group IVE has quickly risen as one of the must-watch rookies on our radar. Made up of members Gaeul, Yujin, Rei, Wonyoung, Liz, and Leeseo, the rising idol band has not only amassed a loyal fanbase of “Dives” since the December 2021 release of their debut single “Eleven,” but a slew of recognition for their brief discography, too — like topping the Billboard charts and garnering millions of streams on Spotify. Not even a full year into their careers, the six-member team has now unveiled its third official single, “After Like,” along with the B-side song “My Satisfaction,” just in time for the end of summer.

Acting as an extension to the 2021 single “Love Dive,” IVE takes initiative with their feelings on “After Like.” Though the group debuted with a sultry pop sound, the latest track pulls from EDM, disco, and house music, even sampling Gloria Gaynor’s 1978 anthem “I Will Survive.” Over its vibrant and upbeat production, the K-pop sextet also experiments with fiery rap verses for the first time, with the lyrics written in collaboration with IVE’s very own Rei.

“[After Like] is a song about expressing your feelings not only with your heart but through your actions as well,” Rei tells NYLON. In the song’s accompanying music video, the members indulge in that expression by pursuing bold confessions while clad in fuzzy hats and coordinating looks. By the end of the firework-filled finale, IVE will make fans question what the next step of their own relationships will look like: “Don’t you dare doubt what I just said/ I’m not just saying I like you/ What's after ‘like?’” It’s a refreshing sip of summer that you’ll never want to put down — and it’s no wonder the girl group is taking over our playlists with their glamorous take on all things love, acting as a confidence boost for listeners.

Ahead of the release, IVE spoke exclusively with NYLON over Zoom about “After Like,” their favorite moments from filming the music video, and what’s next for the band.

Congrats on the release of "After Like!" How do you all feel about dropping this track?

Wonyoung: We’re very thrilled to release another single for our fans. And also we received lots of love for our past songs “Eleven” and “Love Dive,” as you know, so we hope people enjoy “After Like” even more.

If you had to describe the song in three words, what would they be and why?

Yujin: I think it's “summer,” “drive,” and “love.” Because I think it's a very summer-ish song, so I chose that, and “drive,” I think it will go well when you're going on a drive with your friends, and “love,” I think “love” is the word that comes after like.

Could you walk through the meaning behind "After Like?" What is your favorite line from the song, if you had to choose?

Rei: It’s a song about expressing your feelings not only with your heart but through your actions as well and we wanted to confidently and boldly express that in this song. If I had to choose, I’d say my favorite line in the song would have to be the part, “You and I/ It’s more than like.”

Aside from the music, you all have incredible fashion. Could you give us the rundown of your outfits for the "After Like" concept? What were some of your favorite outfits from the video?

Gaeul: I would have to say all of the white outfits because it really suits summer the best.

Wonyoung: For our concept, I’d say it’s a very summer-ish version of IVE and it’s seen in our fashion, too. One of my favorite looks is when we mix-and-matched the white with black, so you’ll see us in fur details like fuzzy hats and bracelets, so it becomes this fashionable IVE style. We didn’t show you guys the summer version of us in our visuals just yet so that’s what’s different this time.

What were your favorite off-screen moments while filming for the music video?

Leeseo: While we were filming the fireworks scene, lots of them exploded in the air and it was so pretty and exhilarating.

Wonyoung: There were so many bugs and flies and it was hot and it was funny for us off-screen. We all screamed about the bugs but we were struggling so much.

If you had to choose a scene or a specific part aside from your own, which member do you think had the most interesting and challenging part in the music video and song?

Yujin: I want to try the rap parts of the song because it’s the first time we’ve ever done so in our title tracks and it’s really cool.

It hasn't been a year but IVE has already gained a lot of attention. I know the journey must've been a long one prior to the group’s debut. What have been some of the most memorable moments throughout this journey so far?

Wonyoung: I would say the most memorable moment for me was when our team name was announced. And at that moment we were very curious what our name would be so I still remember that day clearly. We waited to just listen to our company’s announcement so I remember that clearly. To be honest, it was really rapidly announced and when we heard, we were like “Oh, IVE?”

Gaeul: Our debut day as six members together, that moment. I remember that first day very vividly.

What are some of your long-term career goals?

Liz: Since it’s been almost a year, I want IVE to release plenty of songs throughout our career. I also want to have a concert for all of our fans.

Leeseo: I want to see more of our overseas “Dives!”

Aside from the new music, what can we expect next from IVE?

Yujin: Actually, it's a secret but we have a lot of things planned for you, so please stay tuned and also we'll do our best to surprise our “Dives” and keep them entertained.