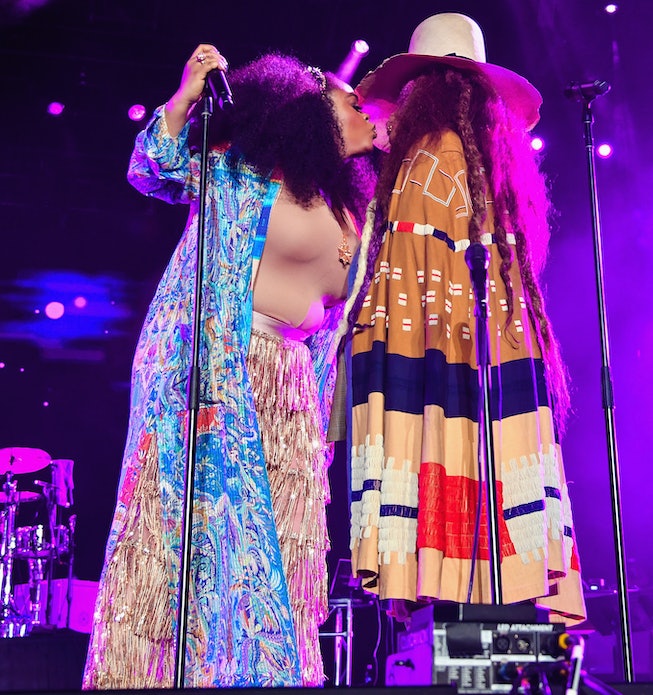 Producers Swizz Beats and Timbaland's classic hits showcase Verzuz puts the best of hip-hop and R&B’s artists, producers, and songwriters head to head, and it's been a breezy way to help viewers forget about the COVID-19 pandemic for a few hours. The show brings in hundreds and thousands of viewers for each Instagram Live session, and the latest lineup is sure to be an education of neo-soul as genre pioneers Erykah Bady and Jill Scott take the proverbial stage.

Badu fans had previously itched for the singer to to face off with Lauryn Hill, but Badu quickly shut down the idea. "I'd be pulverized," she tweeted. Hill was the first woman in hip-hop to snag a No. 1 album and single on the Billboard charts, but Badu could easily win by default since Hill would most likely not even show up to the battle to begin with.

Verzuz is part history lesson, part genuine interactions, and part shade, which keeps viewers coming back week after week for their dose of nostalgia and simpler times. “The world is so dark right now,” Timbaland said of the series’ origins in a recent interview with Vibe Magazine. “I woke up one day, just feeling brave. And I called Swizz like, ‘We should do it over IG Live.’ As soon as I said it, we just did it, we just had fun with it. We just gave the world something beautiful for five hours to take their mind off of what’s going on.”

Watch Badu and Scott face off on Instagram Live on May 8 at 7pm.