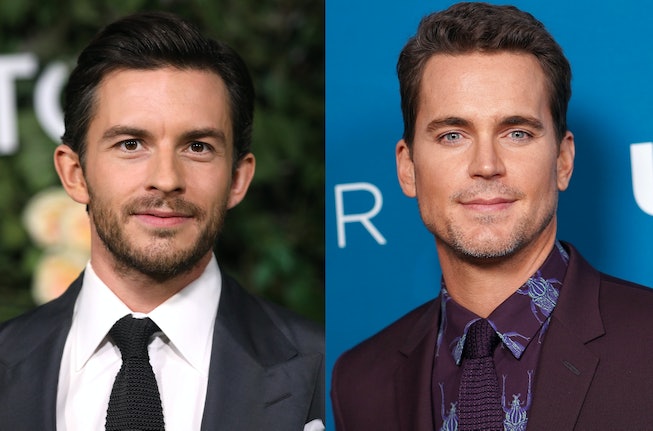 In an inspiring win for Gay Rights everywhere, two openly gay actors have been cast in a big splashy gay love story-cum-political thriller (or is it a political thriller-cum-gay love story, hmm). Right now, Showtime is developing a limited series based on Fellow Travelers, the 2007 Thomas Mallon novel about two men who fall in love after meeting each other during the height of the homophobic McCarthy years. When the project was first announced in April, The Normal Heart Emmy nominee Matt Bomer was already attached as one of the show’s central stars, and now, the celebrated queer actor has found a kindred spirit in Bridgerton breakout Jonathan Bailey.

Described as “a love story and a political thriller,” Fellow Travelers chronicles “the volatile romance of two very different men who meet in the shadow of McCarthy-era Washington.” These “two very different men” are none other than Hawkins “Hawk” Fuller (Bomer) and Tim Laughlin (Bailey). Hawkins is described as a “handsome and charismatic” man who “maintains a financially rewarding, behind-the-scenes career in politics.” Though he has vowed to “avoid emotional entaglements,” Hawkins finds his vows tested after meeting Tim Laughlin, who is described as “a young man brimming with idealism and religious faith.” In today’s announcement, Tim got some more background: he is “a young Fordham University graduate [who is] earnest about his political convictions and filled with optimism about the post-WWII future.”

According to a plot description, Hawk and Tim “begin a romance just as Joseph McCarthy and Roy Cohn declare war on ‘subversives and sexual deviants,’ initiating one of the darkest periods in 20th-century American history.” Over eight episodes, the upcoming limited series will span an impressive four decades, following Hawk and Tim as their complicated love story continues throughout “the Vietnam War protests of the 1960s, the drug-fueled disco hedonism of the 1970s, and the AIDS crisis of the 1980s, while facing obstacles in the world and in themselves.”

This new project is coming at a buzzy time for both actors: Bomer is currently stealing scenes on one of streaming’s most delightfully irreverent superhero shows, HBO Max’s Doom Patrol, while Bailey is fresh off his leading turn in season two of Bridgerton. Combine these resumés with some of the other names involved in the project — Ron Nyswaner, the Oscar-nominated screenwriter behind Philadelphia, created the limited series; Daniel Minahan, the Emmy-nominated director behind shows like Game of Thrones and Six Feet Under, has been tapped to helm the first two episodes; and Allison Williams, the Marnie of Girls infamy, will appear as someone named “Lucy Smith” — and it sure feels like Fellow Travelers is a guaranteed smash. Could this be the sprawling gay drama my little queer heart has been waiting so long for?

For now, there is no word on when we can expect Showtime’s new limited series to premiere. Production on the show doesn’t begin until later this month (where it will start in Toronto) — and with both actors balancing super-packed schedules, who can say how long the entire process will take? Still, if you want to be ready ahead of time, take it from me: it’s never too early to start a Showtime subscription, especially if you like comedy. With new seasons of I Love That For You, Flatbush Misdemeanors, and Ziwe streaming now, you’ll be laughing in no time.

NEXT UP
Culture
Netflix Is Seriously Cracking Down On Sharing Passwords
Culture
Phoebe Dynevor Will Not Return for Bridgerton Season 3
Culture
Succession Season 4 Trailer Explodes With Family Drama
Entertainment
Harry Styles' "As It Was" Grammy Performance Featured A Silver Tinsel Onesie
Style + Culture, delivered straight to your inbox.