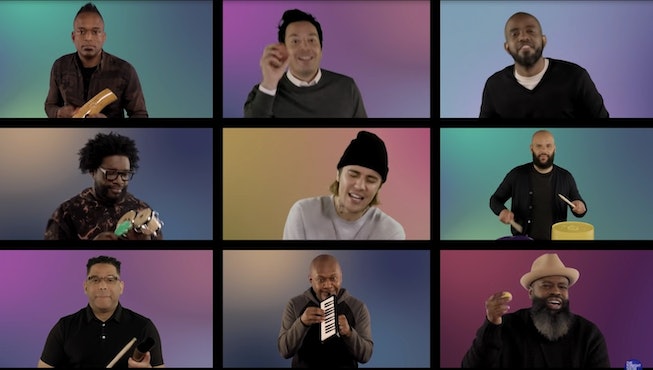 Justin Bieber is feeling the power of “Peaches.” The pop star crashed Monday evening’s episode of The Tonight Show With Jimmy Fallon to deliver a blissed-out performance of “Peaches” with Fallon and The Roots for their popular Classroom Instruments segment.

As is customary with the bit, everyone involved played some version of a kiddie instrument while arranged in Brady Bunch fashion (with Bieber plinking along on a red toy piano) — but the best part is watching Bieber singing and swaying along while not once opening his eyes throughout the entire two minutes. Yes, the vibes are that strong with this one.

We don’t blame him — after all, the breezy, feel-good track, which mixes weed, sex, and Jesus into one intoxicating groove, has taken the world by storm since it was released earlier this spring as part of Bieber’s sixth studio album, Justice. With smooth vocal assists from Drake collaborator Giveon and Daniel Caeser, “Peaches” peaked at No. 1 on the Billboard Hot 100 shortly after its release (it currently sits at No. 3), and has taken off on TikTok with nearly a million videos made to the song. But most importantly, it’s great enough that it’s nearly wiped his last disastrous album, Changes, from our memory, which is all we can ask for.

Bieber released Justice at the end of March to much more positive acclaim than his last project, praising the earnest pop sound and charisma that feels newly imbued into his songs. The album was preceded by singles “Holy,” “Lonely,” “Anyone,” and “Hold On.” “Peaches” is the fifth single, and became Bieber’s seventh song to top the Billboard charts.

In the time since Justice’s release, Bieber has been bringing his feel-good vibes to a variety of shows and offbeat locations, including a recent intimate performance of “Lonely” at a state prison.