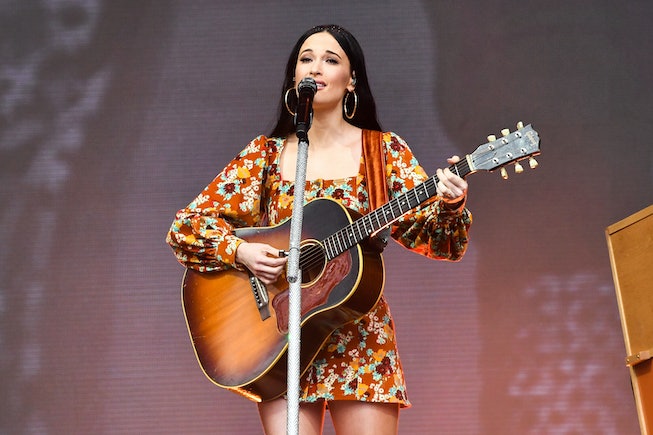 Today is Earth Day, an annual holiday usually designated to celebrating the environment and all its glorious beauty. But this year, the holiday has fallen during a particularly trying time. While things like climate change and mass pollution have silently been damaging our world for decades, nothing has felt as real (or as fatal) as our current pandemic, which has resulted in more than 170,000 deaths worldwide so far. Kacey Musgraves understands how dire the present predicament is, and blessed us with a brief bit of respite by releasing a special "Earth Day Edition" of her Golden Hour track "Oh, What a World." Dedicated to "our planet and all of the heroes on the front lines during the global pandemic," the Grammy Award-winning artist named this reimagining "Oh, What a World 2.0."

“There is a lot to feel downhearted about on this Earth Day. Everyone and everything feels out of balance. People are suffering and the future is uncertain," Musgraves shared in a press release about her decision to release a new version of her song today. "In the face of a pandemic that has brought cities to their knees, a song can feel small. A melody can seem insignificant. This is a global moment of acknowledgment and respect for the power of nature and for so many of us — extreme challenges and sadness."

With lines about "all kinds of magic" and "plants that grow and open your mind," the track was already destined to become an Earth Day anthem. But in its updated version, which simply trades out the original's electronic flourishes for a more laidback acoustic rendition, it becomes a transcendent hymnal. It's a fitting edit for a song meant to look at the positives during a time when we're programmed to dwell on the negative, to celebrate the ways that this pandemic is helping our planet in other ways. As she mentions, now that humans have been forced to slow down in almost every way, "The earth is healing. Bluer skies hang over China and Los Angeles. Clearer water and a positive effect on wildlife is being seen. In spite of all its troubles, it’s still a wild, beautiful world and if you need proof, it’s out there. You just might have to look in a different corner of the sky."

Nevertheless, Musgraves still intends for this song to be a salve to those people who are risking their lives every day to keep countries around the world afloat. "Right now, there are so many brave people that deserve Medals of Honor: the nurses, doctors, grocers, the delivery and truck drivers, cashiers, gas station attendants, the scientists, restaurant workers, the single parents, and SO many others," the singer declares. "I’m just a songwriter but my hope is that if I bring the light I have in my spirit to the table, maybe it could be a form of energy that lifts someone else’s spirit for a moment. Oh, What a World — dedicated to our planetary home and all the quiet heroes this Earth Day: you’re the northern lights in our skies.”