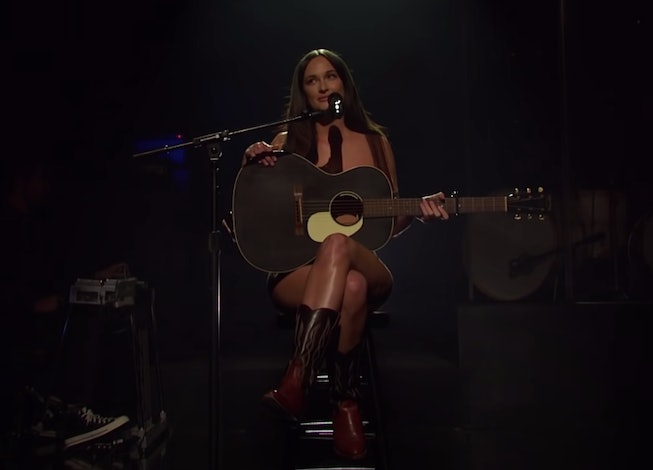 During Saturday night’s premiere for Saturday Night Live’s 47th season, there was plenty to obsess over: Owen Wilson being forced to say increasingly obscene things while recording lines for Cars 4, the welcome arrival of new cast members Sarah Sherman, Aristotle Athari, and James Austin Johnson, and, of course, that emotional tribute to the late SNL great Norm Macdonald. But perhaps no sight was more arresting than that of the night’s musical guest, Kacey Musgraves, who, for her first performance of the night, appeared to be sitting on stage wearing...well, nothing.

Performing “justified” from her recently released album star-crossed, the country singer propped herself up on a stool with nothing but a pair of cowboy boots on her feet and a guitar conveniently sat atop her lap, covering her entire front side. The performer doesn’t seem to be wearing anything else, and given her calculated effort to keep the guitar situated in the exact same place for the entire duration of the emotional single, it was easy to believe that she wasn’t.

Well, if the performance seemed to recall a similar one from a certain six-time Oscar-winning film, that’s because it was meant to be. Shortly after her performance, Musgraves tweeted a picture from Robert Zemeckis’ Forrest Gump, in which Jenny Curran (the love interest played by Robin Wright) sits on a stage performing a folk classic while wearing nothing but a guitar and a pair of shoes. (In the film, Jenny wears a pair of pumps instead of cowboy boots.)

Thankfully, Kacey’s heartfelt performance didn’t end like Jenny’s did in the film. While Jenny was shamelessly harassed by a group of rowdy men sitting in the front row — they laugh and jeer during her song, try to tip her, and later, throw their drinks at her — Kacey was able to get through her entire performance uninterrupted. In fact, the six-time Grammy winner was met with rapturous applause by the audience when she finished. (Thank God life doesn’t always imitate art.)

Though Musgraves never explicitly said that her performance was a nod to this infamous scene, tweeting out the picture seemed to do all the confirming we need. Add in the fact that the singer posted a (since-expired) clip of the full scene to her Instagram Story and it’s hard to argue with the obvious: Kacey Musgraves is a confirmed Forrest Gump stan — as she should be!

Check out the spellbinding Saturday Night Live performance below.