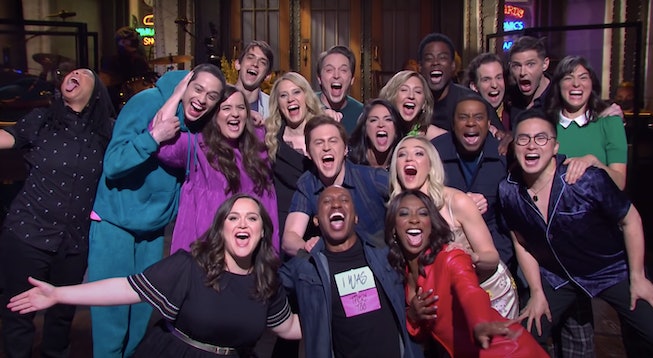 NBC’s Saturday Night Live is gearing up for its fall premiere with a slew of changes to its cast. The iconic late-night sketch show is famous for launching the careers of up-and-coming talent, it looks like this year may be no exception — joining the cast for the first time are comedians Aristotle Athari, James Austin Johnson, and Sarah Sherman.

With their arrival comes the departure of two fan favorites, Beck Bennett and Lauren Holt. Holt joined the cast just last year, appearing on Weekend Update. Bennet signed onto SNL in 2013, quickly establishing himself as a key player with his spot-on former US-Vice President, Mike Pence and Russian President, Vladimir Putin impressions. Both are reportedly leaving the show to pursue other projects.

On Instagram, Bennet shared behind the scenes photos from previous seasons, while reflecting on his time as a cast member. “Love you SNL. Gonna miss you so much,” he wrote. “Thank you for 8 years of remarkable people and incredible experiences that completely changed my life. I had so much fun.”

SNL returns on October 2nd with Owen Wilson hosting the show, and Casey Musgraves performing as the musical guest. Ahead of the premiere, keep reading to learn about the series' newest cast members:

Sherman is a comedian from Chicago, known by her stage name Sarah-Squirm. She’s rounding out the trio as a talented writer and performer, who used to work for The Eric Andre Show as a creative consultant.

Sherman has also written multiple episodes of the Netflix series, Magic For Humans, appeared on the Twitter-famous Megan Stalter Show hosted by NYLON’s latest It Girl, as well as Eternal TV’s Pillars of Magic, and Adult Swim’s Flyaway.

She announced her late-night debut on Twitter, writing, “SNL just made a huge mistake.”

Athari is a self proclaimed “overall paranoid guy,” with a background in standup and acting. In the past, he’s appeared in the HBO Max comedy series Silicon Valley, and an interactive reality show called The Coop.

On Instagram, Athari announced his new job title and his marriage to photographer Maura Grace. “Today I get to celebrate the two greatest things to ever happen to me. Marrying the woman of my dreams @mauragracephotography and getting the job of my dreams @nbcsnl I’ve been pinching myself a record number of times,” he wrote.

According to Rolling Stone, Johnson is a “master Trump impersonator.” The comedian went viral during the 2020 election for impersonating the former US president on Twitter. Before that, he appeared in the Hulu series Tuca and Bertie along with films, Future Man, Blue Like Jazz, and the Coen Brothers comedy, Hail Caesar.

Austin posted his new headshot on Instagram with the caption, “SNL big boy.”