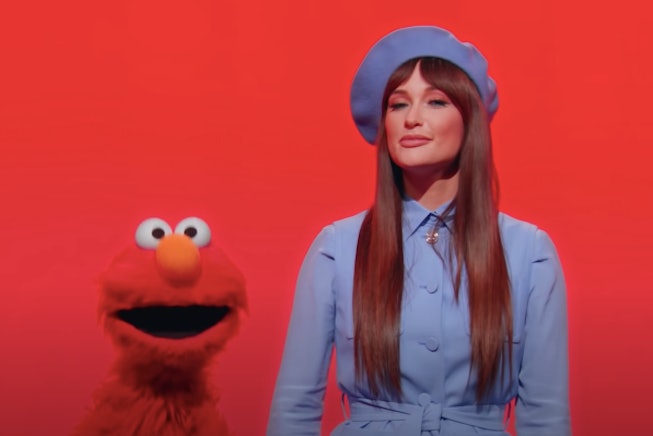 Kacey Musgraves took a trip down to Sesame Street this week. On the series’ most recent episode, the Star-Crossed singer visited the muppet crew, and crafted a song with Elmo, Gabrielle, Big Bird, Count von Count, and Abby Cadabby. Together, the group sang a charming song about their favorite colors. The only issue was that Musgraves couldn’t seem to choose one.

The three-minute clip begins with Elmo introducing “Miss Kacey” to the audience at home. After introductions, he notices the singer “thinking very hard.” Musgraves then announces that she has “a problem,” and can’t decide which color is her favorite.

With the help of Elmo and friends, Musgraves sings a chipper tune about all the colors in the rainbow before deciding that ultimately she doesn’t have to choose. “The world is full of colors, no one is better than the other, so let’s enjoy them all,” she sings.

Musgraves is a part of a long list of celebrities who will be featured on Sesame Street this year. According to Pitchfork, Anderson .Paak, Billie Eilish, and Naomi Osaka are all set to appear on the children's show along with many others.

Aside from her work on Sesame Street, the singer released the album Star-Crossed this year, which is currently nominated for two Grammys. She’s currently up for Best Country Solo Performance and Best Country Song, and the results will be revealed on March 14th.

Until then, watch her performance with Elmo below.