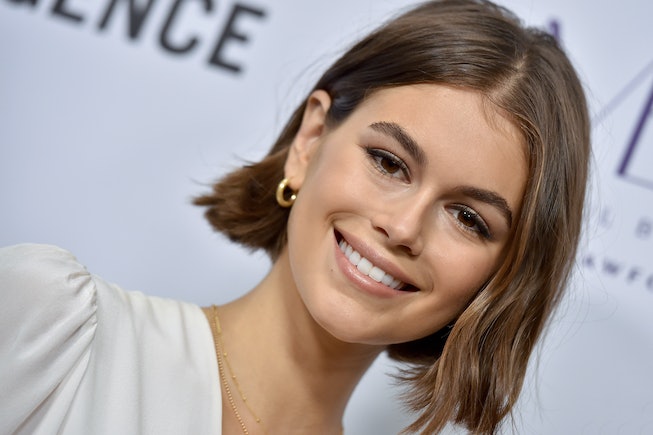 For the past few years, Kaia Gerber has been one of the most in-demand models. From slaying runways to fronting top-of-the-line fashion campaigns, the daughter of Cindy Crawford has become a household name — all before the age of 20. And now, she’s ready to add another item to her CV: actress. The 19-year-old model has officially joined the cast of American Horror Story season 10.

For the past week, American Horror Story creator Ryan Murphy has been teasing details about the upcoming (and pandemic-delayed) season of his hit FX horror anthology show. Last Friday, he revealed that its official name would be Double Feature, as it told “two horrifying stories” in “one season.” The first will take place “by the sea” while the second takes place “by the sand.”

Then, yesterday, he surprised fans with the new cast update. Posting a picture of the 2018 Model of the Year, Murphy said, “Very excited to announce that Kaia Gerber is joining the American Horror Story family.” Murphy’s post didn’t say anything about the role Gerber would play, but given the new season’s double timeline structure, the possibilities are numerous.

Gerber is joining a cast that was already exciting thanks to the addition of Macaulay Culkin, who joined the season over a year ago, all the way back in the pre-pandemic times. The upcoming season will also find the Hollywood newcomer acting alongside AHS mainstays like Sarah Paulson, Evan Peters, Kathy Bates, Billie Lourd, Finn Wittrock, Lily Rabe, Adina Porter, Leslie Grossman, and Angelica Ross. With a cast this stacked, it’s safe to say that the runway assassin is in very good company.