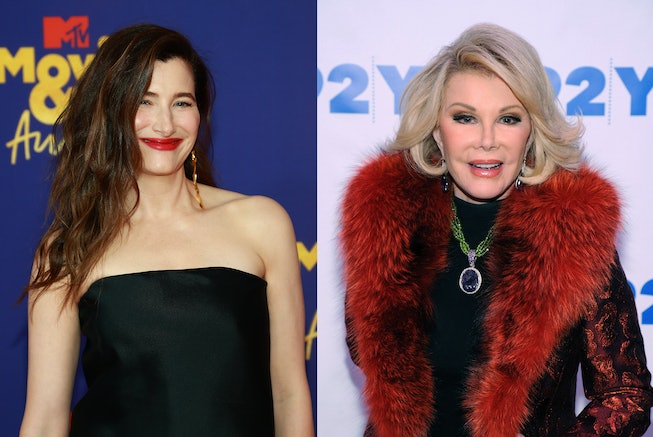 Up next, she will star in Apple TV+’s twisted psychiatry series The Shrink Next Door before appearing in Rian Johnson’s high-anticipated Knives Out sequel. But none of these seem quite as exciting as her most recently-announced role: that of legendary comedienne Joan Rivers.

Titled The Comeback Girl, the upcoming series “is primarily set in the aftermath of the cancellation of The Late Show, which coincided with Rivers’ husband (and Late Show producer) Edgar Rosenberg’s death by suicide,” according to Variety. As many people already know, the late Joan Rivers is widely considered one of the most famous female standup comedians in history. In addition to her work on The Late Show, which made Rivers the first woman to host a late-night talk show, the comedian also served as a regular guest host on Johnny Carson’s The Tonight Show.

The Comeback Girl is currently in development at Showtime, with Cosmo Carlson set to pen the script. Meanwhile, Hollywood mainstay Greg Berlanti is already attached to direct in addition to serving as an executive produce alongside Carlson and Hahn. (According to Variety, Berlanti went to Northwestern with Hahn and the pair have been hoping to work together on a project for a while.)

A logline for the upcoming limited series reads: “Trailblazer. Adored. Cruel. Diva. Joan Rivers had a life like no other. At age 54, she was a superstar comedienne…and then it all fell apart. The Comeback Girl is the awe-inspiring untold story of how Joan Rivers persevered through near suicide and professional abyss to rebuild herself and her career to become a global icon.”

Though the series is still in the earliest of early development stages, I’d say it’s not too early to start getting excited for what will surely be a hilarious and impeccably-acted biopic about a beloved star who was taken from us too soon. With reliable talents like Kathryn Hahn and Greg Berlanti at the helm, it’s pretty certain The Comeback Girl will be a hit.