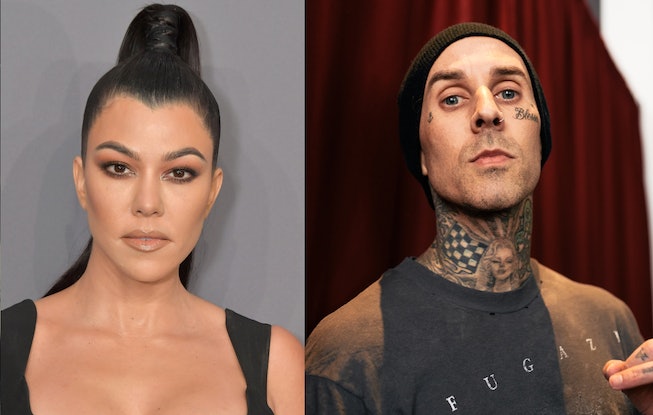 The pop-punk revival is alive and well, and Kourtney Kardashian is living it firsthand. After swirling rumors that Kardashian was dating her longtime friend and Blink-182 drummer Travis Barker, the two seemingly made it Instagram official.

Kardashian posted a caption-less photo of perfectly manicured fingers interlocked with Barker's heavily tattooed ones — that's a coy boyfriend reveal in our book. Kardashian and Barker have been allegedly dating since late 2020, and spent Valentine's Day together (they once again coyly posted the photos of the same fireplace) after vacationing at Kris Jenner’s Palm Springs house together in January.

Back in January, a source told People that the coupling came along naturally: “They’ve been friends for a long time but it’s turned romantic.” Kardashian and Barker have more in common than meets the eye. First off, they're both longtime Calabasas residents, parents to young children, as well as ex-reality television stars; Barker starred in MTV's Meet the Barkers with his ex-wife Shanna Moakler in 2005-06. Also, as Vulture notes, they both love vegan food. Seems like all their bases are set!

It's just like that one Blink-182 song goes: "He fell in love with the girl at the Yeezy show." Wait a second...

NEXT UP
Entertainment
Brendon Urie Officially Disbands Panic! At The Disco
Entertainment
Emma Chamberlain Is Officially Moving to Spotify On February 23 (Exclusive)
Entertainment
Harry Styles Is Performing At The 2023 Grammys
Entertainment
Raye Explicitly Speaks Her Mind On Debut Album, ‘My 21st Century Blues’
Style + Culture, delivered straight to your inbox.