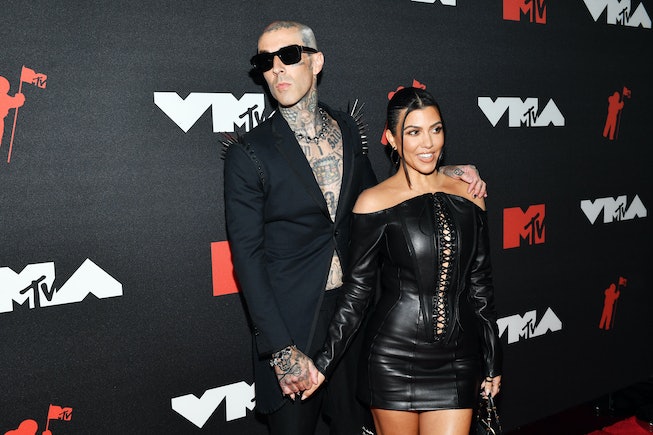 It’s official: Kourtney Kardashian and Travis Barker are engaged! The Blink 182 drummer surprised the reality TV star and Poosh founder Sunday night at the Rosewood Miramar hotel in Los Angeles. The couple had just returned from a trip to NYC, where Barker played the drums for Young Thug’s SNL performance, and decided to have a day trip in Montecito, California, where the rest of the Kardashian-Jenner crew was secretly waiting for them.

Barker recruited his soon to be in-law’s florist, Jeff Leatham, to set the mood for the beach side proposal. Together they created a giant heart-shaped bouquet of red roses, which Barker walked his pop-punk queen into before popping the question. According to an inside source, Kourtney was initially surprised but knew what was happening as soon as she spotted the floral arrangements.

The source told E! that Baker — like a true gentleman — kneeled in front of Kardashian, then, “professed his love for her and thanked her for making him a better person.” “Kourtney was so happy and emotional,” they continued, “she teared up and couldn’t stop saying I love you.’ Soon after she posted a picture of the proposal on Instagram with the caption, “forever.”

While the love birds had their intimate moment on the beach, their families waited in the hotel's restaurant to celebrate. According to E! Kris, Kim, Khloe, Corey, and more were in on the surprise. Despite poking fun at the couple on SNL last week, Kim Kardashian shared her excitement for them on Twitter. The Skims mogul uploaded a video of her older sister's giant, six-carat, ring with the caption “KRAVIS FOREVER.” Kourtney’s other sisters uploaded photos and videos of the night on their social media accounts as well.

It doesn’t seem like Kourtney’s kids were in attendance, but Travis’s daughter Alabama was there to give her stamp of approval. She posted photos of the dinner party on her Instagram story, along with the caption, “So happy for you guys I love you both.” Kourtney’s kids reportedly love Travis, so if they weren’t present for the party they’re likely celebrating now.

With both families on board, all that’s left is to plan the wedding of the century!