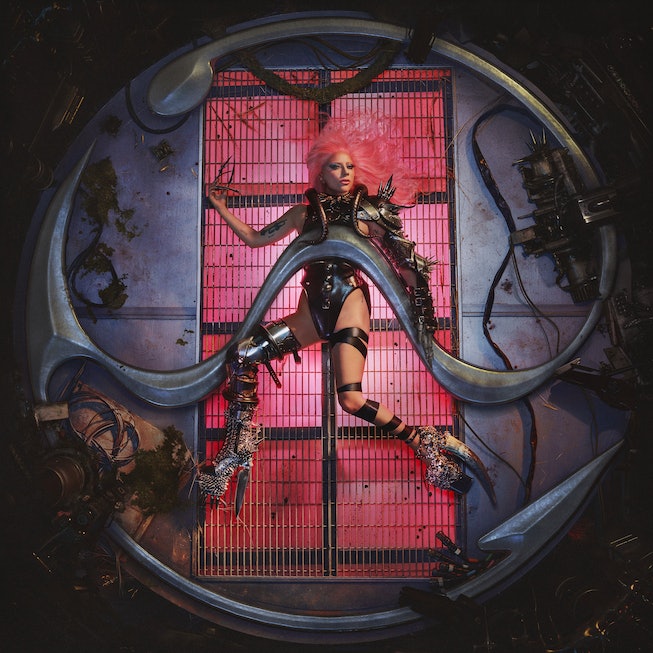 There’s a moment in Lady Gaga’s “Paparazzi” video where a newspaper flashes a brief but prescient headline: “We love her again.” It’s an image that’s been circulated time and time again as a meme amongst her fanbase on Twitter. Over the past half decade or so, Gaga accomplished what once seemed impossible: After being maligned for garish displays and abrasive pop antics, she won back critical and public favor by doing something she swore she would never do at the start of her career — go traditional. And she bodied it.

Between her too-many collaborations with Tony Bennett, her occasionally schmaltzy fifth album Joanne, and the all-out domination of A Star Is Born, Gaga managed to win over the locals, snatching some trophies on the way. Yet for all of the accolades and acclaim she earned during this time, there was still a persistent itch that never felt scratched. Fans of Lady Gaga didn’t fall in love with her for her palatability, but rather because she stood in opposition to it. When she brought dance pop back to the radio in the early 2010s, she did it while being explicitly vocal about her support for the LGBTQ community — long before your other faves did. At the time, nobody with a platform her size was delivering that kind of empowerment.

Nearly a decade later, Gaga could have very comfortably stayed within that realm of adult contemporary, and probably would have been very successful at it. But what a delight that she didn’t. On Chromatica, her sixth studio album, she forfeits balladry for a blitz of Eurodisco. Save for the very loose idea that its title conceptualizes a synesthetic planet where “no one thing is greater than the other” as she touts in the promotional copy, Chromatica has no overarching pretense — and no clear political mission — other than one of pure ecstasy. Engineered with candy-coated production from Bloodpop and BURNS, as well as Axwell, Tchami, Skrillex, Boys Noize, Madeon, and, for the first time on a Gaga album, Max Martin, it’s her most aesthetically and sonically unified body of work to date.

Chromatica kicks off with an adrenaline rush and doesn’t relinquish it for a second of its 43-minute runtime. It pulsates with the triumph of someone who’s learned that they don’t need to prove their worth to anyone but themself. “This is my dance floor, I fought for,” she declares on “Free Woman,” a towering nineties callback spiritually akin to something La Bouche would record. Like most of the songs on this record, “Free Woman” sounds like it’s already been a gay anthem for years. Gaga’s power is at its most emphatic when she’s using it for some kind of liberation. It’s deployed on “Rain On Me,” her Ariana Grande duet that’s enormous enough to feel bigger than itself.

Like much of the album, ““Rain On Me,” is a testament that pain can elicit true pop euphoria. Unlike Joanne, Chromatica knows better than to get maudlin about it. It doesn’t sound like Gaga is taking herself as seriously as before — and that’s a good thing. Chromatica acknowledges that there’s enough despair in the world, and delineates music as a space to just get silly, even if for just three minutes. Because of this, it’s hard to pick a bone with the album’s most wrung out lyrical analogies, like on “Alice” or “Plastic Doll.” (“I'm no toy for a real boy,” she sings on the latter. You’ve definitely heard the comparisons before, but Gaga makes them fun enough that it doesn’t really matter.)

It feels like Gaga is instead hovering around the radical space she once operated in without necessarily interacting with it.

Yet, even at sixteen tracks long — with three very cinematic orchestral interludes — Chromatica still leaves the listener wanting something more. Maybe that’s because the production is so polished that it feels sanitized of any true zaniness, of the experimentation that once characterized Gaga’s work. Parts of Chromatica are sonically reminiscent of her 2011 song “Scheiße,” which mixes German and gibberish into a surprisingly cogent statement on femininity before escalating into a total chaos — a switch that feels noticeably absent on Chromatica. It feels like Gaga is instead hovering around the radical space she once operated in without necessarily interacting with it.

As much as Chromatica is touted as a planet of inclusivity, it’s also a place where capitalism reigns supreme, where the music video for its lead single doubles as an iPhone commercial, and where Amazon’s Alexa eagerly spouts out promotion for “Rain On Me.” It’s also almost doubtlessly a place where Joe Biden — who Gaga teamed with for a sexual assault PSA back in 2017 — will eventually pay a visit. Lady Gaga is far from the most egregious grifter in the game of pop capitalism, and at this point in history, we should know better than to turn to artists for moral absolutism. But for Gaga to plug Chromatica as a place where “no thing is greater than the other” is inherently antithetical to what those kinds of partnerships represent.

This past weekend, while walking to the demonstrations against police brutality in New York, I kept skipping ahead to the last song on the album, “Babylon.” It’s a gaudy and glorious number that sounds like something the Flintstones might vogue to. “Money don’t talk, rip that song,” Gaga commands, as a Herculean gospel choir (the only Black voices on the album) echo her ham-fisted early civilization puns: “Battle for your life, Babylon.” As class disparity, racial inequity, rampant environmental damage and a public health crisis continue to coalesce into something that’s become a very real battle for our lives, it’s going to take much more than just “kindness punks” to win the fight. Is Gaga ready for that?