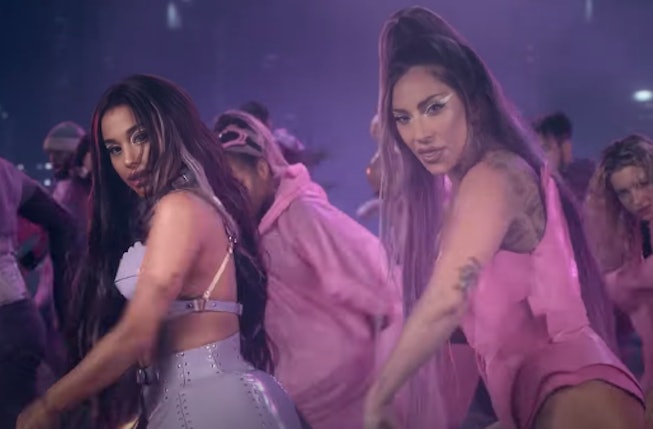 Lady Gaga's highly-anticipated sixth album Chromatica is finally here, much to the delight of Little Monsters in lockdown across the globe. The record marks her first official LP since 2016's Joanne, and it's very much a return to Gaga's roots of fun as hell, escapist pop. Gaga's determination to make the world dance again came to fruition with Chromatica's laundry list of heavy-hitter collaborators, from producer Max Martin to living legend Elton John. Every living room is now officially a dance floor.

“I will do whatever it takes to make the world dance and smile,” she declared to PAPER back in March. “I want to put out a record that forces people to rejoice even in their saddest moments." In order to make the explosive dance album of her dreams, Gaga made sure she had the best producers in the game. She recruited producers known for their work in the genre such as Skrillex, Burns, Axwell and Tchami. Chromatica also includes electropop producer BloodPop, who has worked with acts like Grimes, Taylor Swift, Britney Spears and more. And just to make sure she covered all basis, she snagged Swedish powerhouse Martin, whose work is straight up consistently on Billboard's Top 100.

Chromatica only has three featured artists, and they just happen to some of pop's most sought after voices. In addition to the iconic John, Gaga included contemporary pop diva Ariana Grande and K-Pop girl group BLACKPINK to make dance music history.

"I’m not standing over here with a flag going, ‘I’m all healed, everything’s perfect.’ It’s not; it’s a fight all the time. I still work on myself constantly. I have bad days, I have good days," she continued. "Yeah, I live in Chromatica, it took a minute to get here, but that doesn’t mean I don’t remember what happened. So if you’re in pain and listening to this music, just know that I know what it’s like to be in pain. And I know what it’s like to also not let it ruin your life.”