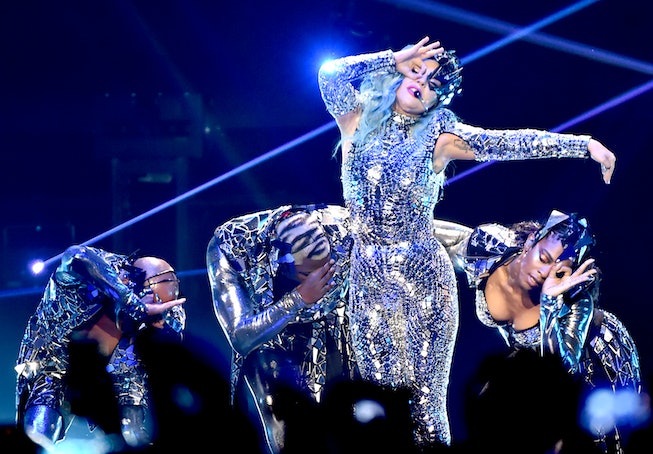 We are now less than 24 hours away from the release of Lady Gaga's long-awaited sixth studio album Chromatica, but the woman born Stefani Germanotta is making sure that we stay fed until then. This morning, less than a week after breaking the internet with her Ariana Grande collab "Rain On Me," Mother Monster surprised her Little Monsters with a last-minute buzz single in the form of BLACKPINK collab "Sour Candy."

A short and sweet single with a beat that instantly recalls Katy Perry's 2017 Witness hit "Swish Swish," "Sour Candy" is a fun, carefree song with in-on-the-joke cheeky lyrics. "I'm sour candy, so sweet then I get a little angry," says BLACKPINK members Jennie and Rosé on the song's chorus. In the outro, Gaga teases, "Take a bite, take a bite. So-sour candy."

According to Gaga, the two artists "listened to each other’s music and became fans of each other," making the collaboration a natural next step. “I called BLACKPINK first to suggest working together," she told the Japanese outlet tvgroove earlier this week. "The BLACKPINK members were happy and showed enthusiasm for the project, so we were able to collaborate thanks to that. I wanted to support powerful women such as BLACKPINK, and they felt the same.”

The single marks BLACKPINK's most high-profile collaboration with an American artist to date, and finds the super popular K-pop girl group singing in both English and Korean. Gaga "got excited while hearing them interpret the song in Korean" and "told them that their part is very creative and fun.”

Talking about the single, members of BLACKPINK said, “It’s such an honor to get to work with Lady Gaga, an artist we like so much, and we’re so happy. We had fun working on the track, so we hope [our fans] BLINKS around the world enjoy listening to ‘Sour Candy.’ We’re hoping that it’s a song that’s loved by a lot of people.”

Either way, it's clear both parties loved working with each other. “BLACKPINK are beautiful young women and they’re very talented. Through this collaboration, I felt proud as if I’d become BLACKPINK’s fifth member,” Gaga said.

Satisfy your sweet tooth cravings with "Sour Candy" below. Chromatica is coming soon.