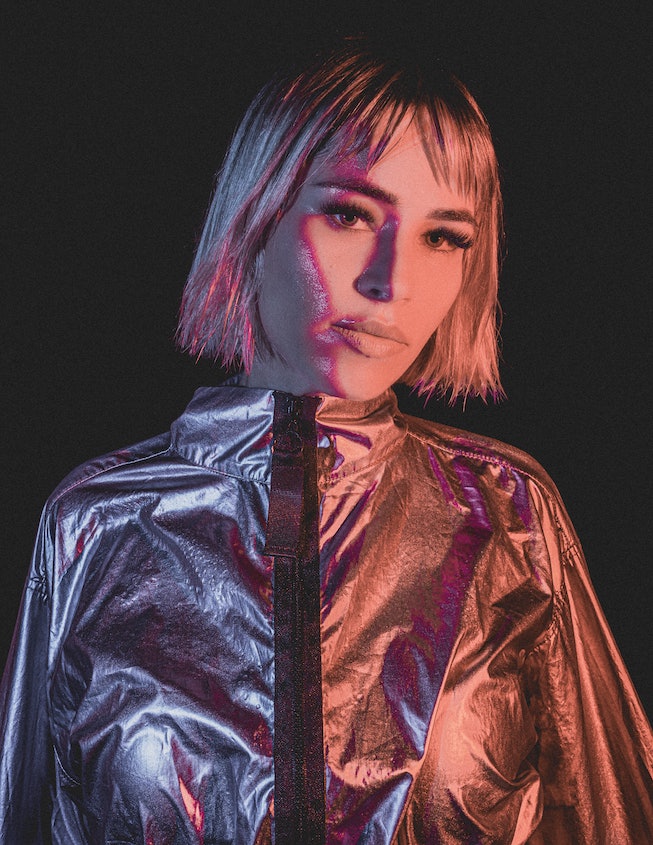 Layla Benitez’s come up as a DJ — from filling in for a friend at a New York club to playing around the globe and getting booked for Coachella 2022 in a matter of years — looked astronomically fast from the outside. But the 28-year-old has been DJing since she was 13, playing friends’ birthday parties and bat mitzvahs. As the daughter of famed DJ John “Jellybean” Benitez, who hung out at Studio 54 and worked with artists like Madonna and Whitney Houston, it’s as if her path was destined.

Now, Benitez is a resident DJ at Space in Miami after what was supposed to be a week-long trip turned into her signing a lease. Benitez’ move to Miami has been influential to her music, which has ushered a move away from deep Afro house music and into a new passion for indie dance, all topped with an ‘80s glitter influenced by the music she grew up around.

NYLON spoke with Benitez about her move to Miami, the craziest party she DJed last year, and how going to art school and growing up in a musical home influences her work.

Tell me about your move to Miami in 2021. Why did you decide to stay?

I came down to Miami last November with the intention of staying for one week to play a few private events. After about a week of being down here, New York went back under lockdown and all my events for the rest of the month were canceled. Since I was doing well in Miami, I just decided to stick around. Shortly after I was offered a residency at Space and signed a lease for an apartment a week later.

Has living in Miami had an effect on the kind of music you play? Did any other genres start to resonate more?

It definitely has. As a Space resident, I am opening for all different artists with ranging music genres. When I originally moved down here, I had actually been playing Afro house for about three years. My first time playing indie dance was opening for Echonomist last spring. I found a new passion for it while preparing for this set and haven't looked back since.

How did you first get into DJing? It seems like you had a relatively fast rise.

I actually learned to DJ when I was 13 years old, my father taught me. I started off playing friends birthday parties, and bat mitzvahs/bar mitzvahs. My first CDJ's were Pioneer 900s and I had to burn CDs and there was no cue button! In college, I picked it back up and played very casually for friends events.

About four years ago, a friend of mine who was throwing massive events in New York City came to me because one of his opening DJs wasn't able to make it. He asked if I could fill in opening up for Guy Gerber. After my set here, many people started reaching out to me about playing other events and it just kind of snowballed. It was a huge rush because I was thrown into the world quickly. Every event for the first few years I received through word of mouth from someone who heard me play, and I truly feel the music speaks for itself. I definitely feel like I have found my purpose.

I know you went to Parsons. Does your art background inform your DJ work at all?

I did go to Parsons, and graduated with my BFA in Photography. I had to take all different kinds of art classes as requirements while studying. But I would say one of the most important lessons I learned there was the creative process.

Your father was a renowned producer and DJ — how has he influenced you?

From a young age, I spent a lot of time with him at home and at his office absorbing what I could. I was always very interested in the industry. I would sit and listen to the thousands of demos that artists would send, and stick around for his meetings. He spent a lot of time trying to educate me about music as well as the business side of it. My ear was exposed to some of the best music from the '70s/'80s, as well as the house music world he was moving into at the time. I think my sound completely stems from being around this. There is a lot of ‘80s influence in the tracks I play and create.

What’s the craziest party you played this year?

The craziest party I played in 2021 was probably iii Points x Secret Project last spring. I played on the main stage in front of thousands and it was an incredible energy.

How does it feel to DJ post-lockdown vs. before? Is there a different energy in the air?

I think the energy is different because I think the lockdowns really made us think about what we take for granted. Music is such a powerful medium of expression, whether you're listening, creating, or playing. I think it really put into perspective how much we need this outlet to feel alive.