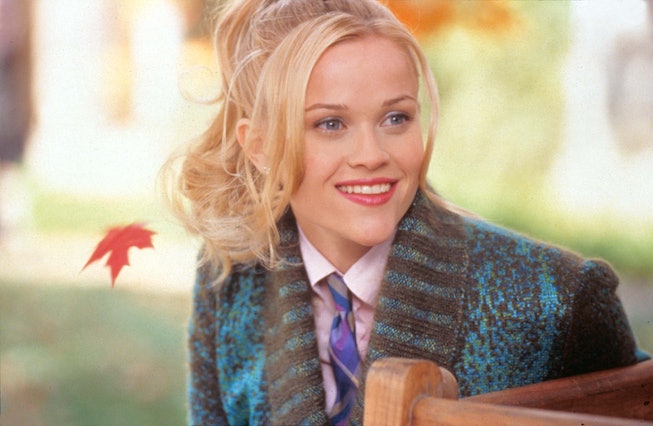 Legally Blonde gained its status as an iconic aughts movie for multiple reasons. There's the premise itself, endless quote-worthy moments, Elle Woods' fabulous little Barbie couture outfits, and of course, the Bend and Snap. The flirting technique, that when used appropriately has "an 83 percent rate of return on a dinner invitation," was a pivotal scene in the film and then culture-at-large.

On Oct. 20, the cast reunited on Zoom to raise money for World Central Kitchen, and obviously gab about how much fun they had filming over 19 years ago. Reese Witherspoon, who famously played frivolous sorority girl turned pragmatic lawyer Elle, revealed that the original plans for the Bend and Snap were much loftier than what made it to the final cut.

"People always, always ask me to do the bend and snap," she explained. "That was a full musical sequence that we ended up cutting out of the movie." Jennifer Coolidge, who played Elle's nail tech-slash-BFF Paulette Bonafonté, also noted that the cast filmed that scene for a month.

"We had all of these dancers behind us, including Ryan Heffington was one of the dancers," Witherspoon continued. "It was just so fun, and it just felt odd, because it was only one musical sequence. But then, it made so much sense when they made a whole musical out of the movie." The Bend and Snap eventually had its moment in the limelight in 2007 when it got the Broadway treatment with an over-three-minute-long song and dance sequence.

Witherspoon will be reprising her role as Elle in Legally Blonde 3, with Mindy Kaling and Brooklyn Nine-Nine creator Dan Goor attached to the script.