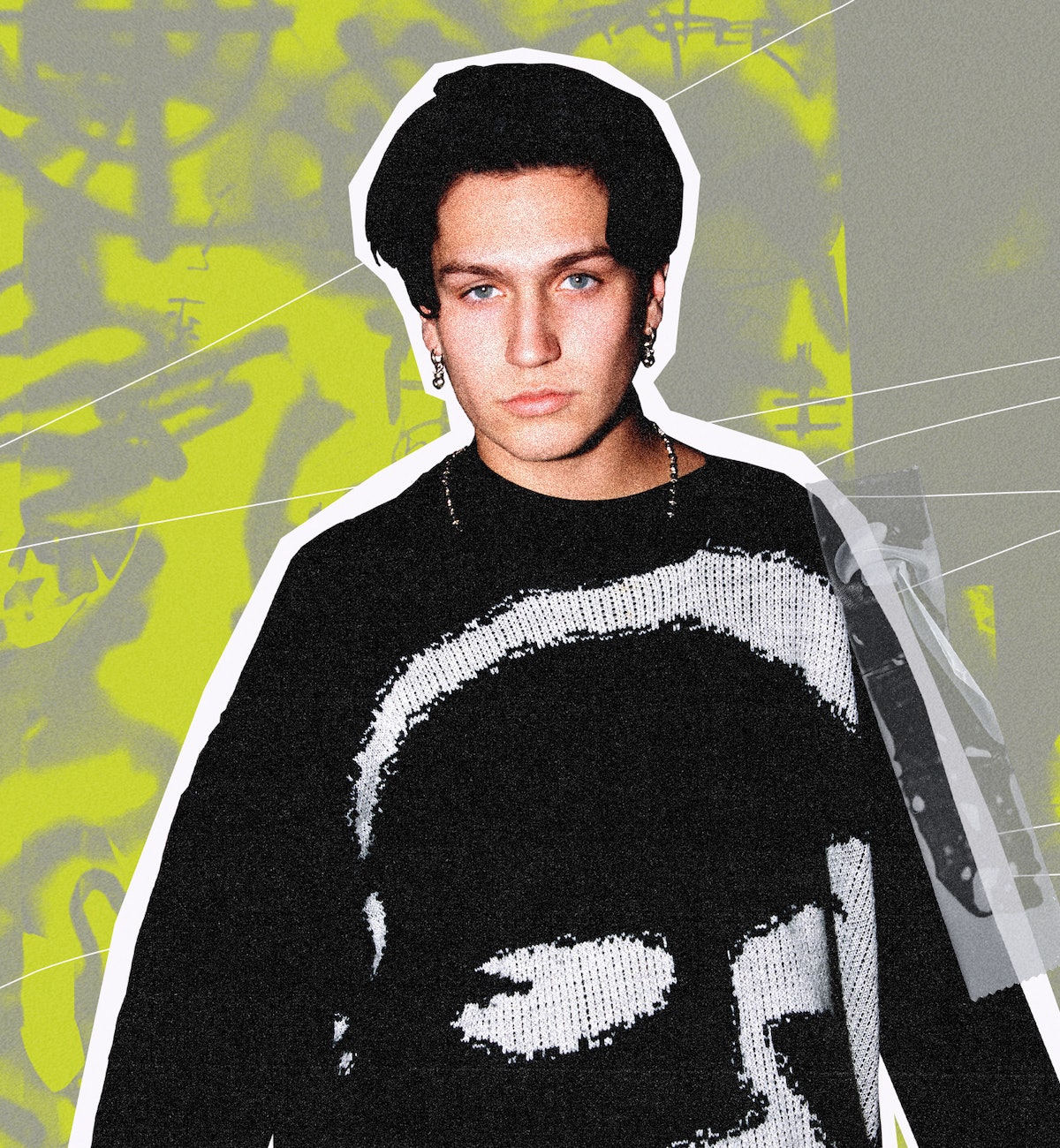 In 1999, Blink-182 released their breakthrough album Enema of the State, effectively putting the pop-punk genre at the forefront of the musical map. Three years later, Chase “Lil Huddy” Hudson was born. This summer, he’s making up for lost time.

“I was raised on f*cking Avril Lavigne and My Chemical Romance and Blink,” the 19-year-old TikToker-turned-musician says. “I've always loved pop-punk. [It is] literally, above all else, the most serotonin-giving genre, the most authentic genre. It’s also something that's angsty and gives me something to talk about. A lot of the genre's about love and I’m a very emotional kind of kid. I have a lot to say, so I thought that would be the best way I could get my message across — if I did pop-punk.” Now, in 2021, he’s pop-punk’s new prince, the genre’s heir apparent.

Clad in a black T-shirt layered with a pile of necklaces, his wash of black hair swooped back and nails painted to match, Hudson certainly looks the part over Zoom, calling from his home in Encino, California. Already a Gen Z megastar, he’s aware that aesthetics are important — you don’t get to 31 million followers without knowing that. “When people started labeling me as an e-boy, I was like, ‘What the f*ck is that? What does this mean?’ It was just the way I dressed,” he says. “Then I had a little bit of a brand change. Changed my hair, started f*cking wearing boots and being a rockstar. And now this is the new persona for me, I guess… When I talked to [Interscope], I had a very direct vision, and they saw that. I fully knew what I wanted to do, and I already had a persona going for myself that was this f*cking emo kid, I guess. My sound fits my persona that I already had built for myself, so they were like, ‘Wow, this completely fits full circle. Go for it.’”

Of course, there’s more to becoming a whole generation’s favorite rockstar than some guyliner and a leather jacket (though, it certainly helps). In January, Hudson released his first single, the tongue-in-cheek, but endlessly catchy “21st Century Vampire”; a month later came the goth-tinged, melodramatic (and still endlessly catchy) “The Eulogy of You and Me.” Each armed with a cinematic music video directed by Joseph Kahn — perhaps most famous for helming Taylor Swift’s star-studded “Bad Blood” clip — it was clear that Hudson hadn’t just idolized his emo heroes, he’d done his homework, too.

“Right now is a great time to be in the scene,” Hudson notes. “I’ve been planning on getting into this kind of music for a while, so being able to do it and have it work at the right time, I think, is super perfect.” Hudson’s own musical debut coincides with a larger pop-punk revival that’s been shaping up for the greater part of the past year: Machine Gun Kelly’s own turn to the genre, 2020’s Tickets to My Downfall, debuted at No. 1 on the Billboard charts last November; Olivia Rodrigo’s latest single “Good 4 U” immediately hailed favorable comparisons to Paramore’s “Misery Business”; even Kourtney Kardashian is getting in on the moment, thanks to her very high profile relationship with Travis Barker, the go-to collaborator for fellow Gen Z rockers like Jaden Hossler, Yungblud, Maggie Lindemann, Nessa Barrett, and, most recently, Willow Smith. “I think there’s a lot of big new artists that are starting to [get] into this genre and sink their teeth in just to really grasp what it is going to become over these next couple of years,” Hudson continues. “And it’s really up to us as to how we want to shape it. So I’m taking that as a personal mission of my own and being like, ‘I need to f*cking shoot for the stars.’”

“When people started labeling me as an e-boy, I was like, ‘What the f*ck is that?’ ... Then I had a little bit of a brand change. Changed my hair, started f*cking wearing boots, and being a rockstar. This is the new persona for me.”

He’ll do that this summer with the release of his first full-length album. Its title and release date have yet to be announced, but rest assured that it’s real and, more importantly, it’s done. “It’s a great feeling,” Hudson says. “It’s a f*cking album.” He remains tight-lipped about the details, sharing only that the record, which he completed over the course of just three months, is “complete vibes” and “the whole story of all the relationships I’ve been through, in no particular order.” “I wanted to write one song about all of the pain that I had gone through in a relationship, which was ‘The Eulogy of You and Me,’” he explains. “And then I was like, ‘Well, I wrote one song about it. Why don’t I tell the rest of the story?’”

For now, the existing singles provide plenty of context into what to expect from the rest of the album. “Eulogy” was co-written and produced by Barker, whom Hudson affectionately describes as “a little wise old man.” “He’s so smart. I say that every time I get asked,” he says. “He has all this knowledge built up in him. I want to know what he has to say about a lot of sh*t. Everyone always listens to anything he says.” While “Eulogy” comes with the burn-it-down angst you’d expect from a Barker-assisted track, Hudson’s most recent single, “America’s Sweetheart,” shows off the singer’s more vulnerable side. “I wrote this song about the worst night of my life,” Hudson captioned an emotional TikTok explaining the track. “Being able to write music has been the greatest outlet. I remember feeling so alone and depressed at the beginning of the pandemic. Even with the support of my family, friends, though it all I wasn’t okay. I’m glad I’m able to do what I do today. It’s cool being able to channel and write about different emotions through music.”

“The only song I was really scared [to release] was ‘America’s Sweetheart,’ and that one’s out, so now I don’t give a sh*t,” Hudson says now. “I was just scared that people online… They take things out of context so quickly it’s crazy.” Preemptively taking some fuel out of that fire, Hudson cast fellow TikTok star and real-life ex-girlfriend (now close friend) Charli D’Amelio as the music video’s protagonist. “I really thought it wouldn’t work any other way,” he says. “If I didn’t have Charli, it wouldn’t make sense. I couldn’t see anyone else playing the role for the music video.”

With that fear of vulnerability behind him, Hudson is now simply looking forward to what comes next — which involves surprisingly both his fans and himself. Recently, he started practicing with a live band in preparation for an eventual tour. “When I’m by myself I’m actually an introverted kid; I like having a tight little circle and I don't really trust too many other people,” he admits. “But [on stage], I’m a mad man, just crazy. I think Travis Scott’s a great performer — I’m not trying to be him or anything, but I think he’s dope. I like that kind of energy. I definitely sing my heart out.”

His excitement to, as he puts it, “just f*cking send it” is palpable as the notion that this will soon be his reality settles in. “This is so fresh,” he says. “You’re one of my first 20 interviews. I'm going to have 1,000 of these. I’m savoring the hell out of it. It’s only up from here. I really don’t know where it’s taking me, but it’s just a start. I’ll probably end up at a festival, maybe I’ll end up in an award show. Who the hell knows?”