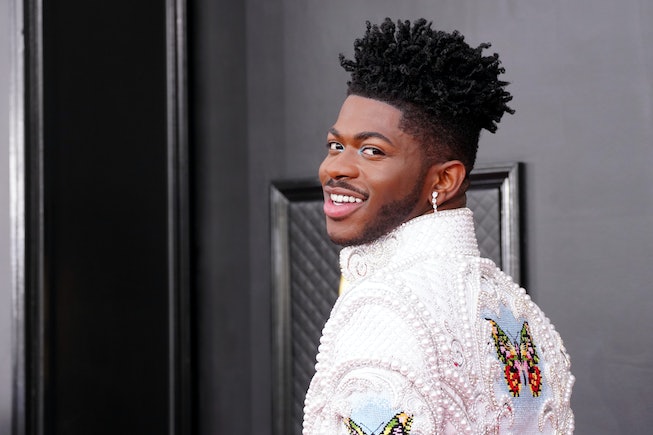 Lil Nas X is nothing if not a showman, and he pulled out all of the stops for a truly spectacular 2022 Grammys performance on Sunday night, which included references to his Satan shoe scandal, a Jack Harlow cameo, and three outfit changes.

The pop star took the stage in a dramatic black robe for “Dead Right Now,” before transitioning into his rendition of “Montero (Call Me By Your Name).” But while he was making the quick outfit change — into a crystal-encrusted crop top — the stage set began flashing images and audio bites of the backlash the pop star received in the aftermath of his controversial music video — and his “Satan shoes” endeavor. It was a powerful response to the homophobic criticism that’s been thrown his way, and Nas only seemed to further prove his position above it all with the rest of his star-powered performance, which closed with one last outfit change (into a glamorous Balmain military jacket get-up that seemed to channel Michael Jackson) and a Jack Harlow appearance for “Industry Baby.” There was also, among the sea of background dancers, a huge Lil Nas X bust, as well as impeccable choreography.

The energetic performance immediately became a highlight of the night, as did his friendship with Harlow, with whom he arrived on the award show’s red carpet. The two posed for photos together in their color-contrasting fits — Lil Nas X in an all-white Balmain suit with butterfly details, and Harlow in a classic black suit and tie.

In 2020, Nas took home his first two Grammy awards for Best Pop Duo/Group Performance and Best Music Video, both for his smash hit “Old Town Road (Remix)” featuring Billy Ray Cyrus. He released his debut album, Montero, in September 2021 to wide acclaim, alongside the singles “Montero (Call Me By Your Name),” “Industry Baby,” and “Sun Goes Down.”

NEXT UP
Entertainment
Muni Long On The Grammys, Burnout & Not Worrying About The Labels
Entertainment
Harry Styles Is Performing At The 2023 Grammys
Entertainment
Annie DiRusso Makes Indie Rock For Your Growing Pains
Entertainment
Raye Explicitly Speaks Her Mind On Debut Album, ‘My 21st Century Blues’
Style + Culture, delivered straight to your inbox.