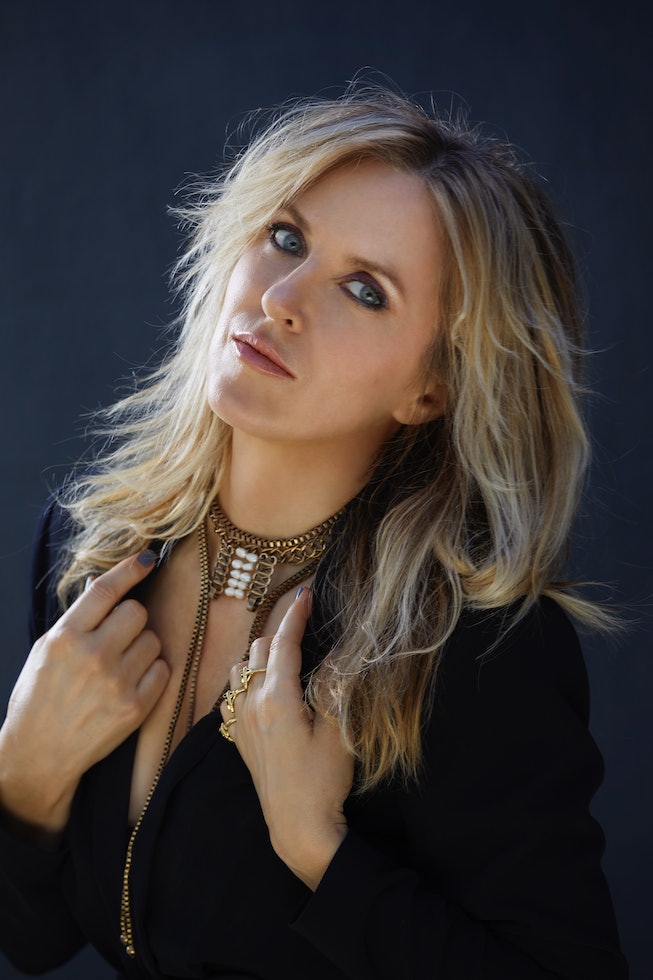 There’s a song from Liz Phair’s 2003 self-titled pop crossover album called “Rock Me” that I listen to with intense regularity. The track, produced by Hilary Duff and Avril Lavigne savants The Matrix, boasts a big, cheeky, sugary hook about sex with younger men, and has a winking nod to women who dare to age in the spotlight: “Your record collection don’t exist/ You don’t even know who Liz Phair is.”

That album, Phair’s first on a major label, was perhaps unfairly maligned, receiving a rare goose-eggs (0.0) review from Pitchfork. At the time, Phair shared the review, thinking the rating was funny. After all, she was a revered indie rock singer of the ’90s who happened to be female, wrote frankly about the complexity of womanhood, and endured smarmy and outright misogyny for doing so.

Throughout her career, Phair’s always done it her way: adventurously, forthrightly, uncompromisingly. Her approach has influenced generations beyond her: yes, the Avrils and the Hilarys, but also Snail Mail, Phoebe Bridgers, Mitski, and the list goes on ad infinitum. She’s also influenced me, a Black, queer, and trans person, with her song “Canary,” a track from Exile in Guyville about defying societal expectations determined to cage you in. Is it any wonder I or anyone else oppressed by these expectations identifies so closely with Phair’s music and lyrics?

Phair is now back for the first time in 11 years with a new album, Soberish, a fitting title for a record about meeting herself where she’s at. Teaming up again with Brad Wood, the producer who helped shape the intimate and genre-blurring sounds of her acclaimed debut and many of its follow-ups, Phair recaptures their undeniable musical chemistry on Soberish; rebellious song structures, catchy but idiosyncratic melodies, and rootsy textures are all over it.

The writing, however, is all Phair, as she tackles the art of being present on songs like the title track and “Spanish Doors”; she reflects on her native Chicago on “Sheridan Road” and, as ever, smashes the patriarchy on tracks like “Hey Lou” and “Soul Sucker.” On the latter, she banishes draining men with an unshakable sense of personal power: “Don’t ask for whom the bell tolls/ It tolls for me.” It’s a statement that is both hopeful and present, proof that the core ingredients of what makes Phair so distinct have remained largely unchanged. As Phair’s Twitter bio once read for a while, she’s simply “right where you left me.”

Over a recent Zoom call, the legendary singer spoke with NYLON about following her own arrow, the pursuit of clarity, and that peculiarly modern phenomenon of “being perceived,” something Liz Phair is quite familiar with.

I’m good. How are you doing?

I’m great. I’m actually in LA just for a few weeks for the very first time ever in my life. Can you believe?

Wow. I remember that feeling. I guess now with the pandemic it’s not the same. You can’t do much. What’s your impression of it?

It’s glamorous and trashy and lazy and seductive all at once. Is that how you feel about it too?

Nailed it, except you need to add in the spirituality of crystals and Reiki.

Oh, of course. I met a medium who gave me her card at lunch the other day. She was just like, “Here.”

Yes, you’ve been given a card by a medium. Can I give you one other thing you have to do? One other quintessentially LA experience? You have to go to some actor’s house and sit around with their friends who are all actors and watch how they never want to leave a small room because they’re all so into “their connection.”

OK. How long have you lived in LA now?

I’m from Chicago, so that’s my roots, too. I wanted to tell you that when I grew up, for some reason, I got a copy of Exile in Guyville from my dad and I was listening to “Flower” when I was 8.

He knew that was on there? [Laughs.] I would not have let you listen to that at 8.

Weirdly, I guess what I took from that was that you always did your own thing. Did you have anyone that you look to who taught you that, or was that just something you had to learn on your own?

A couple of things flashed into my mind as you were asking that question; No. 1 would be growing up with Madonna and how much she changed her image over the years, that playfulness that she demanded for her brand in a way. You could tell she understood the game of advertising and how we want artists, who are essentially unformed, searching individuals, and we want them to be correctly labeled, packaged, and delivered with maximum Starbucksian palatability each time.

There are two ways to experience my career. I can either be the artist that I am or I can be the artist that the public perceives me to be. As an artist myself, I’m always making music and I would always love to share it. If I could put out my demos and have people hear them the way I hear them with all the potential, I would be doing that. The tension is me living as an artist wanting to share with people, wanting to share this cool thing I just made [often] gets in trouble with the way we package artists and present them. It’s hard for me to reconcile taking care of “my brand,” and at the same time, feeding my soul.

I really believe that your writing shines through in everything you do. Soberish is your first record in 11 years, and there’s so much color and hope throughout it. Was that intentional? It’s coming out just after we’ve collectively experienced so much.

Yes, it was. I had made a point to do that in the very beginning, though a lot of the record was finished before COVID-19 happened. I feel like I can hear a demarcation between what the record would have been had Trump been re-elected and what it sounds like now. I was in the mode when I first started making this of wanting to be two things that contradicted each other. I wanted to be familiar; I wanted some of the sounds we use to build the record to be sounds we used on other records together. But then I wanted to position us in a way that I felt I was positioned at the beginning of my career, as someone pushing the edge a little bit. So I said to Brad, “Even though we’re using all these familiar building blocks, we need to be on an unsure, yet forward-leaning footing. We need to try to pioneer a sound for ourselves 25 years later that doesn’t sound like anybody else.” I know everybody wanted Guyville Two. I’ve never wanted Guyville Two. I think Guyville’s Guyville.

The title of Soberish seems very fitting given this description. It feels both like a bit of a joke, but sort of a commentary on how clarity meets us where we are. At least, that’s how I interpret it.

Oh God, I love that. Clarity is always meeting us where we are.

When you consider what society has been through in the last few years, “soberish” is a great descriptor because it feels like many people are clearer than ever, but there’s still work to do.

Yeah. It’s like the whole society is soberish. We’ve gotten our *sses kicked a little bit, a lot. And I think part of what caused society to be so fraught was how much people didn’t want to face reality. Denial is massive in this country and I think that’s partially because — these are just random theories — but our capitalist society works better when you can get people to buy into stuff, and just keep producing.

In your song “Sh*tloads of Money,” from Whitechocolatespaceegg, you sing the lyric: “It’s nice to be liked, but it’s better by far to get paid.”

That is it. That’s the power, isn’t it? Everything else is talk. I didn’t even think of it, but you have made a new meaning for [“soberish”] in that it is the perfect description of where we’re at collectively. Part of us just cannot touch the reality of what has happened, how many people have died because of COVID, how many people didn’t have to die, how isolated everyone’s been, what we thought was our reality before COVID that’s not really reality. There’s a deeper reality that’s been exposed and that was happening under Trump as well. Plus, substance use is on the uptick because who can stand it? And I play beyond substances, denial in ways in which we let ourselves escape. You can be drunk on something that isn’t a substance.

Do you have a favorite song on the record? Mine has to be either “Soul Sucker” or “Ba Ba Ba,” but it feels unfair to pick.

You guessed it: “Ba Ba Ba.” I love the trick of it. I love how it starts then it so effectively finishes on the line “it’s the end of us.” The song is emblematic of how I try to be around guys I like. You go from the person in the scene who’s trying so hard to be likable, then you realize, “I f*cked up again.” I feel like this song has some of my best poetry, where I sing about the sound of gravel underneath my feet as I’m sent out the door, and he has wings on his back. I reference the Garden of Eden. Every time I hear that song, I cry because it’s about me trying to be the girl I know everyone wants in the beginning, and the girl who leaves is the person I truly am once again — not fitting in, not making it right, and having that artist’s intelligence, too.

The album art features a road sign that you’re pictured at the intersection of. What does that mean to you?

Well, on “Sheridan Road,” I’m singing about this artery road that exists between Chicago’s northern suburbs and downtown, so there was this sense in that song that one road carried so much of our life’s weight. There were also the times when I was escaping my suburban life and going downtown to let it out and be more human. End up going down to Sheridan Road.

The street corner simply shows where I am in my life. I’m right here, and I’m just going. I’m not lost. You lost sight of me in the public sense, but I was never missing and I was never not connected to our culture, never not creating, never not living my life 100%, as I always have. There’s no difference between me now and me then, other than where I am and what I do with my time. I love creating and I take it seriously, and I like other creators, and I wish more of the world. I think creativity should be involved in everybody’s life. And in some way it is, but I wish more people felt comfortable letting themselves show without going 16 drinks in.

Liz Phair’s Soberish is out now.