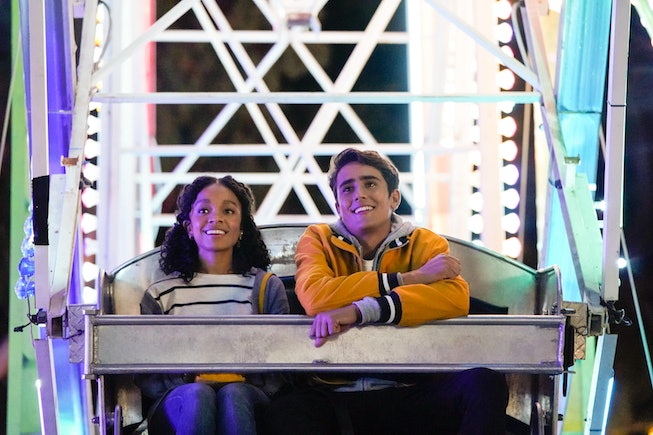 In 2018, Love, Simon made headlines for its status as the first major Hollywood studio motion picture to focus on a gay teenage lead. Admirably charming (even if it was admittedly a bit trite), the Greg Berlanti-directed screen adaptation of the beloved Becky Albertalli novel was a promising step in the right direction. If nothing else, its success suggested that other, more challenging teen-focused fare about queer people could also work in the future. From that emerged Love, Victor, an upcoming Hulu series set in the same world as the film but focused on a different protagonist — albeit one that seems to be dealing with many of the same problems Simon has in the original film. Now, the series, which will release in full next month (just in time for your at-home Pride festivities), has released its first trailer.

As seen in the trailer, Love, Victor follows the adventures of high school sophomore Victor, the oldest child of a Latino family who moves from Texas to Atlanta after some family troubles and finds himself attending the same school where Love, Simon's Simon is now considered something of a legend for the brave public proposal he made in the film (about a year or two in the show's past). Upon hearing Simon's inspirational story, Victor, who is struggling with his own burgeoning queer desire, reaches out to Simon for advice while trying to figure out where he fits in at his new school and navigate his new life.

Like Love, Simon, Love, Victor is a "teen coming out story," and while the prospect of such a story can seem somewhat hackneyed in a 2020 landscape, I was pleasantly surprised to find that Love, Victor feels like so much more. Even more charming and well-rounded than the film it was based on, the ten-episode series — which, if you recall, was infamously moved from its original home of Disney Plus to Disney's sister streaming service Hulu when executives decided that some of its themes (sexual exploration, marital strife, alcohol use) weren't "family-friendly" enough for the Disney banner — is a joy throughout, bolstered by strong, funny writing and a brilliant cast of actors that play up its romcom sentiments with aplomb.

Starring Annabelle Comes Home's Michael Cimino in the titular role, Love, Victor features a sprawling cast that includes Ugly Betty's Ana Ortiz as his mother, One Day at a Time's James Martinez as his father, Isabella Ferreira as his sister, The Bold and the Beautiful's Anthony Turpel and The New Normal's Bebe Wood as his new friends, and Booksmart's Mason Gooding as his enemy. His love interests are played by Will's George Sears and Rise's Rachel Hilson (in what I hope will be a breakout role for the talented young actress). Additionally, original Simon star Nick Robinson returns to provide narration throughout while his on-screen kiss-companion Keiynan Lonsdale pops up during a special later-season episode.

Check out the trailer for Love, Victor below. The series premieres on Hulu on June 19th.