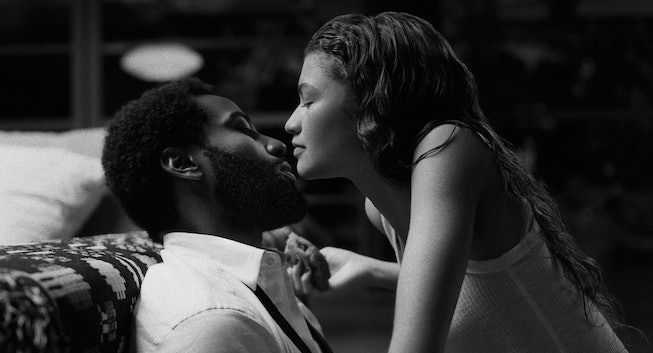 2020 was a massive year for Zendaya, and it seems like 2021 is already going her way. Netflix released the trailer for Malcom & Marie, the actress' mysterious, super secret quarantine film and what will likely be some serious Oscar fodder.

The Sam Levinson-directed film was reportedly won in a bidding war by the streaming giant for a whopping $30 million, and stars BlacKkKlansman and Tenet actor John David Washington as the Malcom to Zendaya's Marie. The trailer offers a peak into the moody, black-and-white film that follows the couple throughout one evening; filmmaker Malcom and his girlfriend Marie return home after his movie premiere and await its critical response, only to unpack their relationship and uncover various revelations. There's lots of brooding and tension, which is all amplified by the beautiful black-and-white cinematography. This is not a love story,” the trailer says. “This is the story of love.” Like we said, mystery and brooding abound.

Malcom & Marie was shot entirely during the pandemic lockdowns over the summer, where the shooting took place in a single location to maximize COVID-19 safety precautions. Since acquiring the film, Netflix is gunning for Zendaya to get her first Oscar, and is campaigning on her behalf for Best Actress.

Watch the trailer below and stream Malcom & Marie on Netflix starting February 5.