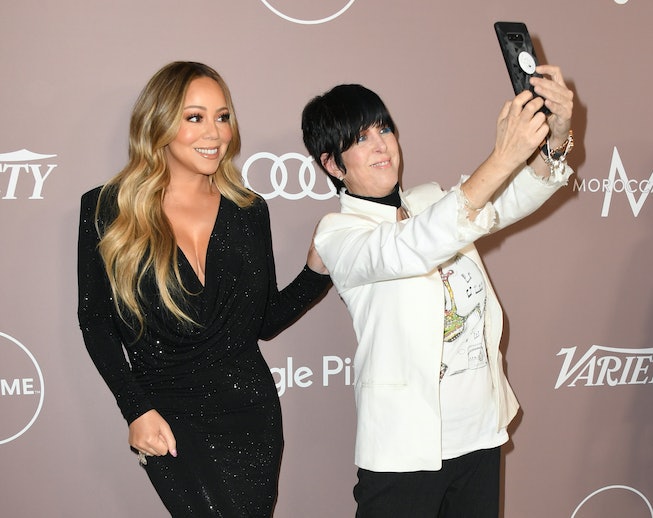 Ghislaine Maxwell, accomplice to notorious, high-powered pedophile Jeffrey Epstein, had her bail hearing yesterday. Maxwell is charged in a six-count indictment with sex trafficking young girls for her former boyfriend Epstein to sexually abuse in the early '90s, and participating in some of the abuse herself. Maxwell's arrest and future trial are of high international public interest, and her hearing alone was listened to on a conference call by more than 1,000 people who dialed in on a first-come, first-served basis.

After the hearing — in which Maxwell was held without bail — the internet was buzzing with the new information revealed, including but certainly not limited to a secret husband, how she created a fake identity as a journalist named Jen Marshall in order to covertly buy the sprawling New Hampshire estate where she hid from authorities over the past year, and much more. As the news circulated, so did a curious red carpet video of Mariah Carey pushing a woman with cropped, black hair eerily similar to Maxwell's once-signature haircut. "That time Mariah shoved Ghislaine Maxwell out of her way," read the caption to the hilarious, extremely Mariah-core video. Mariah is famously shady, and she was briefly an American hero for looking visibly annoyed with an alleged Maxwell and treating her with the non-existent respect she deserves.

Just as quickly as it came, the video was debunked; despite the similarities, the woman in question was not the "madam" to an infamous sex pest, but songwriter and clear Mariah fan Diane Warren. The thing is, if push came to shove — see what I did there? — Mariah could absolutely take on Maxwell, so as far as I'm concerned, the video is canon. Perhaps Mariah will be able to attend Maxwell's July 2021 trial and see to it that justice is served.