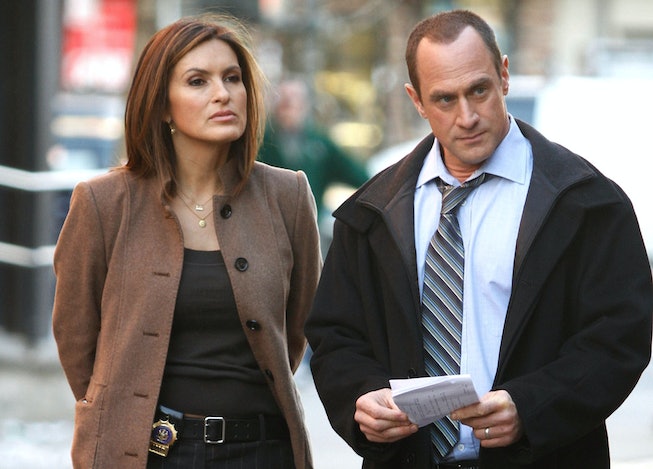 In case you didn't know, in the criminal justice system, sexually based offenses are considered especially heinous. Thankfully, in New York City, there just so happens to be a group of dedicated detectives who investigates these vicious felonies known as the Special Victims Unit. Two of the most famous detectives on the squad are, of course, the fictional Olivia Benson and Elliot Stabler of Law and Order: SVU, played by Mariska Hargitay and Christopher Meloni.

The duo spent 12 seasons hunting down rapists and seeking justice for victims, right up until Meloni departed the series. Now, as the long-running series gears up for its 22nd season, Meloni is set to reunite with Hargitay on-screen for the season premiere. Hargitay teased the appearance on Instagram with a sweet, smiley photo and a brief message: "It's on." Fictional sex offenders, the end is nigh.

The fated reunion also doubles as a catch-up on what Stabler has been getting into since he left the Special Victims Unit. "We're going to reintroduce my character, Elliott Stabler, and give the audience the backstory of where he's been, how he's been, and he's going to rejoin the NYPD, but with the organized crime unit," Meloni told EW recently. Meloni's pitstop on SVU will essentially serve a crossover episode for his new series, Law & Order: Organized Crime, a spin-off drama that centers Stabler as he leading detective of a NYPD organized crime unit.

NEXT UP
A Night Out
A Night Out With Rachel Bilson
Culture
Phoebe Dynevor Will Not Return for Bridgerton Season 3
Culture
6 Shows To Binge Once You've Finished 'The White Lotus'
Culture
Spice Girls May Reunite For King Charles’ Coronation
Style + Culture, delivered straight to your inbox.