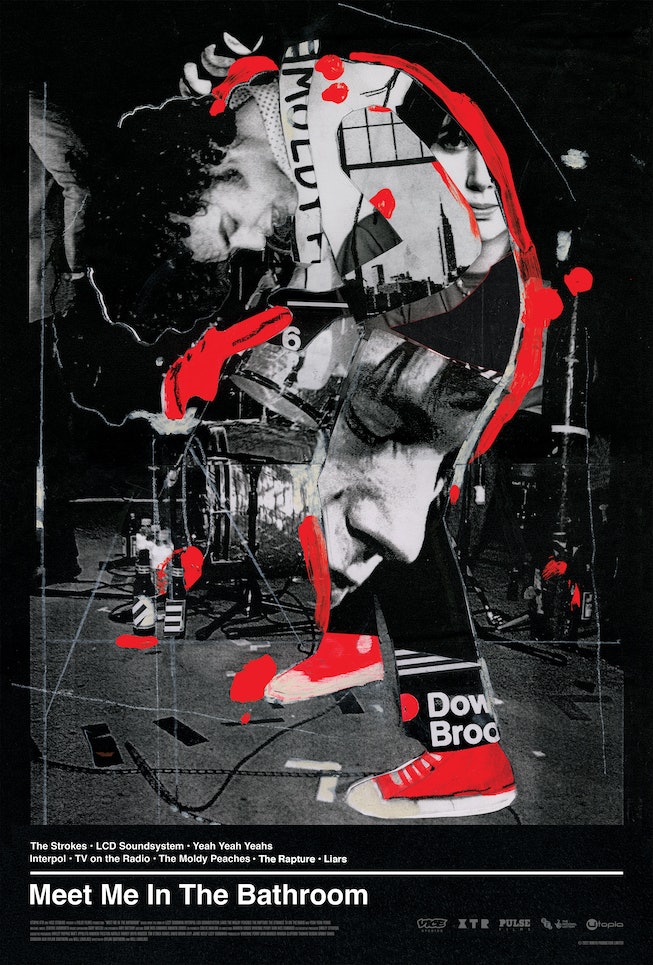 That’s how Kimya Dawson and Adam Green, also known as The Moldy Peaches, felt even as they were helping build the 2000s indie rock scene that would become a gorgeous, fleeting lightning strike on the culture.

In the first few minutes of Meet Me In the Bathroom, the 2022 documentary directed by Dylan Southern and Will Lovelace, and based on Lizzy Goodman’s 2017 oral history that chronicles the music scene we now refer to as indie sleaze, the Moldy Peaches are making a documentary of their own in their apartment, inviting neighbors to hear them sing tunes about “sucking dick for ecstasy.” It’s 1999; the Lower East Side is boarded up; Y2K is imminent; they felt like New York was over. “I remember thinking maybe New York wasn’t the kind of city anymore that produces iconic bands,” Green says in the doc. Little did they know, they were about to build an entirely new scene of their own.

While Goodman’s book chronicles New York’s indie rock scene across a whopping, nostalgic 650 pages, the documentary focuses on the years just prior to and following 9/11, recounting the start and end of the scene through archival footage of interviews, performances, and NME and Rolling Stone clippings from the bands that defined the era: LCD Soundsystem, Interpol, Yeah Yeah Yeahs, The Strokes, Liars, Moldy Peaches, Rapture, and TV On The Radio. Favoring old concert footage, MTV clips, and videos taken by members of the Strokes or Moldy Peaches — of them gallivanting around airports or on cross-country road trips — over talking head interviews, the documentary seeps you in nostalgia, highlighting the scene through media mostly made by the people in it, in all its rough glamor.

There’s something about the documentary that makes it feel much older than the early 2000s, not just because of the film grain, but because it captures the timelessness of any creative scene that is driven by the young and fearless. (Its not one but two uses of Walt Whitman’s “Give me the Splendid, Silent Sun” also contribute to this.) At its core, Meet Me in the Bathroom is a montage of coming-of-age stories, except James Murphy’s and Karen O’s coming-of-age stories made a profound impact on not only the culture, but on many of us for whom their music is core to our own.

We see James Murphy go from a dorky club kid who didn’t dance (!) take ecstasy once (approved by his therapist) to performing for the first time in front of an audience at the age of 30 in a defiantly raw “Daft Punk Is Playing At My House.” We see Karen O go from performing open mics at the Sidewalk Cafe, not fitting in as a half-Korean woman in rock, to becoming one of the most influential women in music; we see her self-destructive performances eventually give way to self-preservation. We see Interpol hit it big only to make no money because of Napster. We see Julian Casablancas go from boarding school kid and moody son of models to controlling frontman. But all of it is timeless: Casablanca’s suits, Karen O’s bottle cap necklaces, that feeling of youth and energy and boundlessness.

The turning point for the indie rock scene comes after 9/11, to which much footage is devoted. There’s a particularly ghastly video of Paul from Interpol walking around the wreckage of the Lower East Side picking up papers. Again, people thought the world was ending. Again, they thought New York was over; everyone was paranoid and sad and confused. “I was grieving for my city. I felt deep trauma,” Karen O says of that time. “When I performed, I could be somewhere else. Almost like a split personality.”

After 9/11, artists and musicians moved across the bridge to a Williamsburg of not Diptyque and Madewell but of abandoned buildings and warehouses. “The rent was so cheap you could afford to take risks,” Murphy says. Brooklyn was “about potential and freedom,” as Brian Chase of the Yeah Yeah Yeahs says. Crucially, he says, it was “outside of public attention and expectation. That’s what nurtured us. We could all be weirdos in the best way possible.” A scene is nurtured by the people physically there, and Karen O only cared about playing in New York. Touring, she says, wasn't a concept to her. Playing outside of New York wasn’t even a concept for her. The footage that probably best captures the community – when everyone and everything was on the rise – was a parking lot show in Williamsburg, a year after 9/11, where the Yeah Yeah Yeahs play “Our Time,” and neighbors and Hasidic kids peered out of windows and lined rooftops to watch.

Eventually, things change, as they always do. Karen O was getting hurt onstage. She felt isolated and worn down by the “business and bullsh*t and press and attention,” she says. Albert Hammond Jr. of The Strokes was addicted to heroin. A deeply uncool Ryan Adams was a fly in everyone’s ear. The Strokes album fell far short of the millions of copies that were predicted to sell. Williamsburg was gentrifying; rents were tripling. Nobody was making any money thanks to Napster.

But it was going to end because everyone was growing up; because you can’t maintain that energy forever: the kind that maybe burns brightest in the beginning, or the kind that is best showcased not in the peak of performance, but in the moments just before. Some of the most compelling long shots show The Strokes in their early years running amok on the subway, or drinking bottles of Budweiser at a dive bar, Casablancas and Hammond Jr. kissing each other on the mouth and laughing. “Those years,” says James Murphy, “were the Big Bang of my life. I finally found my friends. I felt safe.” Eventually, even Karen O leaves New York. “I felt too nostalgic for when everything happened,” she says. “It was just like a flash.”

Meet Me In The Bathroom opens in theaters in New York and Los Angeles on Nov. 4, and in select theaters nationwide for one night on Nov. 8. It begins streaming on Showtime on Nov. 25.