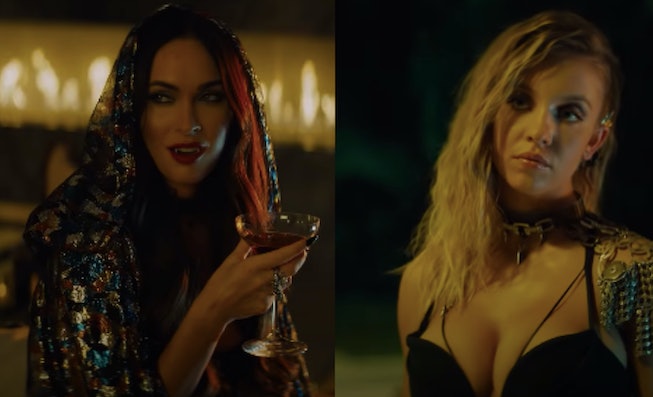 Debby Ryan, Lucy Fry, Megan Fox and Sydney Sweeney are starring in a new horror movie, right in time for spooky season. The Netflix Original Night Teeth follows a college student named Benny (Jorge Lenderborg Jr) who moonlights as a chauffeur to make some money. Unbeknownst to him, the two charming women he picks up (Debby Ryan and Lucy Fry) for a night of party hopping are far more dangerous — and bloodthirsty— than they seem.

As his night spins out of control, Benny is thrust in a war between vampires and the protectors of the human world. Cue Sweeny and Fox, the seductive leaders of an underground league of vampires, set on maintaining their rule. “Who do you think runs the city?” Ryan asks. “We are richer and more powerful than you can imagine,” she continues, as Fox deviously sips a martini in the film's trailer.

According to the synopsis, Benny’s brother (Raul Castillo) is leading the fight against his passengers, and will stop at nothing to defeat them before dawn. But with sunrise quickly approaching, “Benny is forced to choose between fear and temptation if he wants to stay alive and save the City of Angels.”

Night Teeth was written by Brent Dillon and directed by Adam Randall. According to Rolling Stone the film was inspired by the1985-classic, Fright Night. “When I read the initial script for Night Teeth it was a low-budget horror movie, 90% set in a car,” Randall told the publication. “The story was of a young guy driving two vampires around LA, which in itself was a hugely fun idea. What excited me was the idea of combining a thrilling and comical story of Benny’s crazy night, with an expanded and more crime-focused world outside.”

With the help of Dillon, they created a movie that explores multiple film tropes. “On the one hand, you have a rich, dangerous, detailed underworld of vampire crime families, gang wars, power and money… and then on the other this kid who is completely out of his element. The clashing of these two worlds, of these different genres — crime thriller, coming of age, supernatural horror — all over one night in the big city, felt like the potential for a new take on the vampire movie, something intense, funny, and a little crazy,” Randal said.

You can see the chaos unfold on October 20th on Netflix. Until then, sink your teeth into the trailer below: