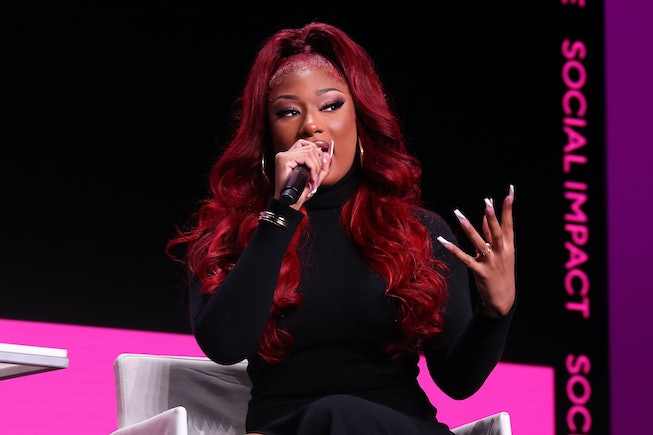 Megan Thee Stallion is arguably the hardest working star in the music industry right now. In 2022 alone, she released an album, did double duty on SNL as both host and musical guest, starred in a Cheetos commercial for the Super Bowl, performed at the 2022 Oscars, and appeared at countless other award ceremonies, all while also managing the ins and outs of two ongoing lawsuits. If the rapper is in dire need of a break, she’s certainly not letting it show. In fact, she’s already teasing the many major projects she has set for next year — first and foremost being new music.

In a new Forbes profile, the rapper revealed that her next record and third studio album is due for 2023, and will arrive alongside a world tour and a spate of other non-music related projects. The rapper reportedly has a comedy based on her childhood already in the works with Netflix, too, as well as a documentary based on her life with Time Inc.

“I can’t slow down right now,” she told Forbes. “I’ll take a break when I’m dead. I’m trying to really build something. When I start sitting, I feel like I’m not doing enough or I’m giving somebody else the opportunity to pass me.”

Though few details about Megan’s new music have been released, fans are speculating that the quick timeline between projects — she just released her sophomore album, Traumazine, in July of this year — is likely related to her ongoing legal battle with her record label, 1501 Entertainment.

The rapper initially sued her label in March 2020 over an unfair and “unconscionable” recording contract which she signed when she was 20, though the judge eventually ruled in her favor. In February 2022, she sued her label for a second time — this time over the definition of an album. Megan, who had two more albums left to deliver before fulfilling her contract, asked the court to rule that her 2021 release Something For The Hotties constituted as an album, while her label argued in a countersuit that it didn’t classify as such. Amid the lawsuit, she also accused 1501 Entertainment of sabotaging the rollout of Traumazine, stating that they leaked the album, though they denied it.

The suit is still ongoing — the judge is expected to deliver a decision in 2023 — but it would make sense if Megan wanted to get ahead of the decision by preparing an album in case the judge rules in favor of her label and she has to deliver yet another one. If that’s the case, as with Traumazine, which was released the same week it was announced, there could be a good chance her next album will get a similarly fast-tracked rollout.

Still — the year is young, and who knows what’s to come with Megan Thee Stallion’s 2023. All that’s guaranteed is that it’ll be busy, hot, and we’ll definitely be watching.