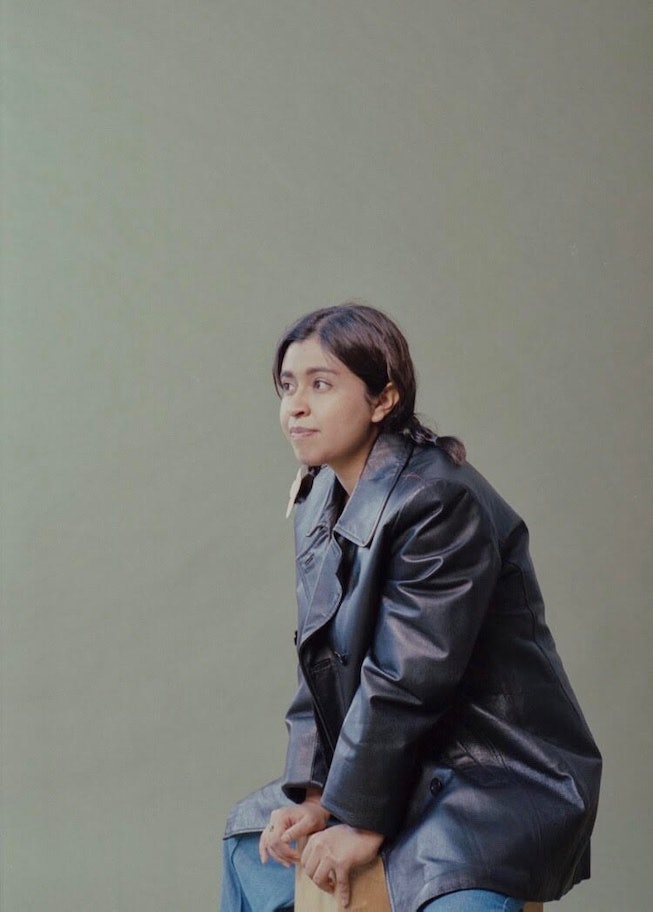 Over the last decade, Chicago’s music scene has given us daring indie singer-songwriters and a host of innovative electronic producers. Mia Joy, one of the city’s breakout acts in 2021, is in the center of that diagram.

Her excellent debut album, Spirit Tamer, showcases her ability to pen catchy, shimmering shoegaze pop on track (“See Us”), and then otherworldly ambient soundscapes (“Saturn”) on the very next. Joy, also a multi-disciplinary artist, feels no pressure to choose a single side of herself, blending naturalistic emotion with impressionistic lyricism. “That’s why I called it Spirit Tamer, because really, it feels like I don't really have control over what comes out and what needs to be written is written,” says Joy.

Her records unfold with the methodical precision of an auteur filmmaker, never adhering to staid song structure. All she needs on the single “Haha” to convey resignation and a wry appreciation for the inevitability of time passing is a dry laugh. The repetition of lines on “Last Night Together” captures how all-consuming missing a loved one can truly be.

We spoke with Joy about striving not to be easily marketable, how her different creative pursuits overlap, and what prompted her to take her music public.

Making Spirit Tamer, your debut album, was a multi-year process. Now that it’s been out for more than half a year, are you still in the mindset of promoting it or have you begun your next writing phase?

Yes and also yes. All of those things at once. I started writing this album in the winter of 2018, so as you can imagine, I’m a little burnt on playing the same material, but I also have this really precious responsibility of performing them for the first time, really. I’m booking my first tour and trying to reimagine how that could be safe in the panini.

Also, I’m very patient with myself when it comes to new material, because I want it to be so true and so authentic and I want to really love it because I know when it’s three or four years later and it’s out in the world and I’m performing it, I want to be really sure that it represents me and that I like it enough to keep playing it for so many years afterwards.

On Spirit Tamer, is there one particular song that you found really took that sort of full duration of time to crystallize into what you want it to be?

“See Us” was one long take. It all came out at once. That gives me the chills, too, because you know that you’re onto something that is needing to come out and you’re trying to capture lightning as it is. I am totally an impressionist with everything that I do. I’m multi-disciplinary, I do pottery, I paint, I write, I do so many different things and I like to just throw paint at the wall, so to speak, and work with my mistakes as they come about. Everything is also intentional, even though I leave a lot of space for interpretation. I read this review that was this man saying, “I don’t usually listen to indie rock by young women, but I was surprised that I loved this.” The entire tone was “I was surprised that I loved this. Men can like this soft sh*t, too.” He liked the bangers, but he could not understand my interludes. He said, “Yeah, this doesn’t go anywhere,” which tickles me so much.

It’s like, “Let’s unpack that. What about this doesn’t feel like it’s for you?” And also, it’s really funny because maybe it isn’t. Maybe you’re just barging into my room and you’re listening to my diary and you’re like “Oops, I shouldn’t be hearing this.” And maybe also there’s a piece of you in there and you’re allowing yourself to find yourself in new music. I’m a big champion of that.

It’s frustrating when a critic seems to take pride in not getting something.

I don’t want to be marketable. I shouldn’t say that to you, but I don’t want to be perfectly understood or have a sound, so I think when I’m paying attention to the algorithms and maybe my album isn’t getting as many plays because I don’t perfectly fit in exactly indie or exactly shoegaze or exactly ambient. I’m a little bit of everything and that's what I’m intending to do. And maybe that’s not helping my numbers, but I hope I’m not talking to you about numbers 30 years from now.

Your music is subtle, which sometimes can lead people to come up with pretty out there interpretations. What sort of reactions have you gotten to your album?

I think it’s important to state that Spirit Tamer was written after a breakup but is not about a breakup. It’s about coming to yourself and being like, “Here I am now, I’m putting my pieces back together.” It’s about that experience. I think there are only two songs about the breakup itself. “Ye Old Man” is literally about my dad and people misread that to be about a lover all the time…If you want to feel that song to be for a lover for you, that’s okay with me as well. But it’s not as I wrote it.

There are plenty of really great hooks on the record that stick with the listener. When you’re writing, are you striving to find the middle ground between your ambient instincts and the fact that you can write a really catchy chorus?

Yeah. Unfortunately, it’s completely subconscious. That’s why I called it Spirit Tamer, because really, it feels like I don't really have control over what comes out and what needs to be written is written. I know that sounds so pretentious and gross, but it’s true, it’s really my mood and where I’m at in my life. I think I approach everything with an open mind or as if I’m meditating as well, with the instruments on and I know when I find it.

How crucial do you think the fact that you’re in Chicago has been to the way that your career has progressed?

I’ve been trying to grow out of the habit of extending all of my success and progress to the people that I’ve worked with. Obviously, I got myself here. But, I do feel like every single person on this record, down to the text design artist, the photographer, every single person is my friend. So it is so personal and an act of love. I really believed that people want me to do well. I kind of hold that really precious responsibility of people loving you and believing in you and wanting to see you reach…It’s all very homegrown and an act of love that I’m even here, which is such a privilege.

You’ve clearly always loved making music, but it’s different to get to the point of pursuing it seriously. I think very often in those cases, that comes from the people around you instilling the sense that you should go for it. You know that you’re good enough to do it, but then taking the leap can require an external push.

I would just change the wording as in, not “seriously,” because I’ve always taken my art and music seriously, but “publicly.” That was a huge jump, an incredibly huge corner in my life. 24 and younger, I was incredibly private. I am still very private, but I was just making things and making things and recording things and always in my bedroom, literally a bedroom lo-fi artist. I had to take the loving, warm embrace of my friends and my partners and my community being like, “You can do this publicly and it’ll be okay, we can corral around you and find people to play in your band.” It just happened that way where I decided that I was willing to share my inner world, crack the door open a little bit more, and more to do things publicly. I wish that I had done it so much sooner, but I also don’t think that I was ready and I think that I needed to incubate a little bit longer to find what exactly my voice was.

Is there anything else about you as an artist that we didn’t get to touch on that you would want to make sure we mention?

I didn’t come from any money. My parents aren’t CEOs or in the industry. They are artists, but I really want it to be known that it still blows my mind that I’m here and I’m so grateful that I am here. My 15-year-old self didn’t believe that I could be here, and I think even if you don’t quite know your voice yet, I still think that young people intrinsically have the vision and the drive. I think it’s just also really important for poor kids and Black and Brown kids to see themselves and see that it’s possible. It literally keeps me alive to know that maybe someone like me is listening to me. That’s what makes it all worth it.