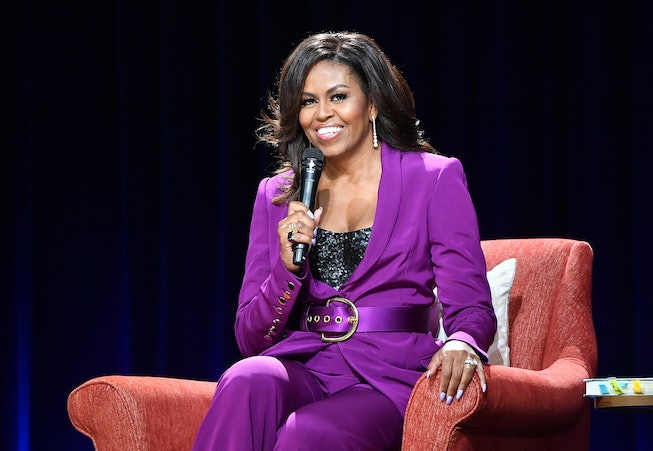 "I'm getting caught up on what you guys are doing," Michelle Obama tells a group of Black girls at a community event in Philadelphia, right before reaching out to hug the one sitting closest to her. As the first words heard in the first look trailer for her upcoming Netflix documentary Becoming, this touching gesture serves as an appropriate mission statement: a documentary following the former First Lady as she tours the country in support of her 2018 bestselling memoir, Becoming allows us, as viewers, to get caught up on what she's been up to as well.

Directed by She's the Ticket's Nadia Hallgren ("a rare talent" according to Michelle herself), the documentary is described by Netflix as "an intimate look into the life of former First Lady Michelle Obama during a moment of profound change, not only for her personally but for the country she and her husband served over eight impactful years in the White House." Offering a "rare and up-close look at her life," the film will take viewers behind the scenes as Mrs. Obama "embarks on a 34-city tour that highlights the power of community to bridge our divides and the spirit of connection that comes when we openly and honestly share our stories."

In a special "Note From Michelle Obama," the former First Lady details a bit more about the highly-anticipated project. "Those months I spent traveling — meeting and connecting with people in cities across the globe — drove home the idea that what we share in common is deep and real and can’t be messed with," she said before pivoting to our current pandemic, claiming that, now more than ever, "I treasure the memories and that sense of connection...as we care for our loved ones, tend to our communities, and try to keep up with work and school while coping with huge amounts of loss, confusion, and uncertainty."

Though she owns up to being a "hugger," citing the intimate act of embrace as "the most natural and equalizing gesture one human can make toward another," Mrs. Obama assures us all that there are ways to be there for one another even if we can't do so physically. "Even as we can no longer safely gather or feed off the energy of groups, even as many of us are living with grief, loneliness, and fear, we need to stay open and able to put ourselves in other people’s shoes. Empathy is our lifeline here. It’s what will get us to the other side. Let’s use it to redirect our attention toward what matters most, reconsider our priorities, and find ways to better remake the world in the image of our hopes."

So, with that being said, it's time to prepare for Becoming. As our favorite FLOTUS says, "Even in hard times, maybe especially in hard times, our stories help cement our values and strengthen our connections. Sharing them shows us the way forward. I love and miss you all."

Take a peek at the first look of Becoming below and get ready for its Netflix debut on May 6th.