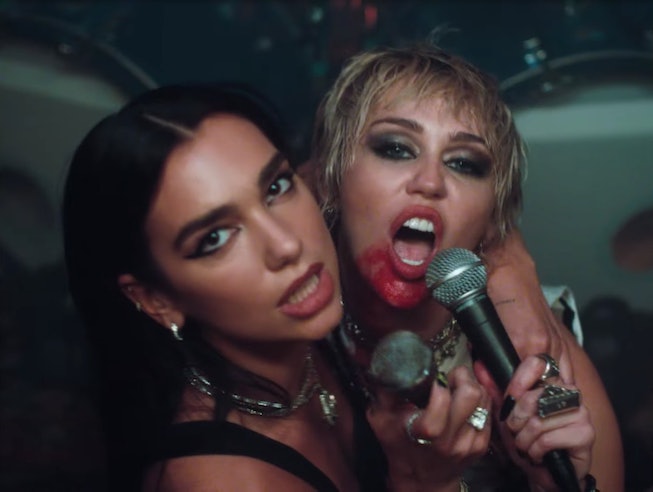 If you've ever watched The Runaways, the 2010 biographical drama flick about the real life Joan Jett-fronted rock band, then you'll remember that the wall of sexual tension between Kristin Stewart's Jett and Dakota Fanning's Cherie Currie was thick enough to pummel with a wrecking ball.

Well — Miley Cyrus and Dua Lipa have just released a video that might've topped even that level of, um, frustration. The two pop star's highly-anticipated collaboration, "Prisoner," which was finally unleashed into the world on Thursday, directly channels that Jett and Currie charisma, and is definitely the hottest video of 2020.

Over incredibly catchy disco riffs (and a chorus that sounds uncannily like Olivia Newton-John's "Physical"), Cyrus and Lipa slink around the cluttered confines of a tour bus and each other in the Alana O’Herlihy and Cyrus co-directed visual. It's a simple premise taken to the rowdiest and hedonistic extreme: there's fake blood, lots of leather, cherries (a nod to The Runaways' biggest hit, "Cherry Bomb"), licking, gyrating, and at one point Cyrus eats a spider. (It's CGI but you get the vibe.) Midway through, it's like Ok — I don't know if I want to be one of them or be between both of them.

"I think it's [...] coming at a perfect time for everybody," Cyrus said of the song in a recent Beats 1 interview. "I mean, we're just trapped in our emotions right now. I mean, really me, there's no escaping it. It's like, 'Locked up, can't get you off my mind.' Anything that you've tried to suppress or compartmentalize at that point, it's coming up. It's yours to own, to own it or release it."

Cyrus added that she and Lipa recorded several other songs before finally landing on "Prisoner." "We just waited until we felt like, 'Now this is [a] Dua-Miley song.'"