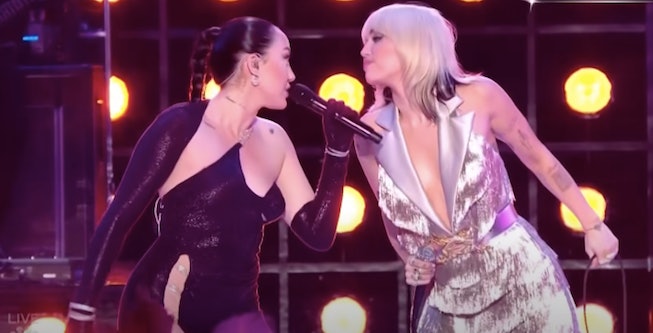 Amidst the wardrobe malfunctions, slightly cringe Will Smith covers, and ill-conceived resolutions, this Friday’s revamped, millennial-focused NBC-Does-New-Years-Eve special featured one really special moment that seemed to soar above the others. Approximately twenty minutes before the clock struck midnight, ushering us all from one crazy year into what is sure to be an even crazier one, co-host Miley Cyrus brought out her “baby sister,” fellow singer Noah Cyrus, for a delightful cover of Dolly Parton’s “Jolene.”

“Welcome to the stage my baby sister,” the older Cyrus (and master of cover songs herself) announced to a packed crowd of screaming fans. One of many surprise guests in Miami for Miley’s New Year’s Eve Party Hosted By Miley Cyrus and Pete Davidson, Noah was greeted with a very warm welcome, smiling from ear-to-ear as she and her sister walked hand-in-hand, strutting to the center of the stage as the opening tune to “Jolene” strummed up in the background.

With Miley dressed in a sparkly, tinsel jumpsuit (one of several incredible looks the Hannah Montana star donned throughout the two-hour broadcast) while Noah rocked a vampy black one-shoulder gown, the sisters made an eye-catching duo. The Grammy-nominated pair sounded incredible as they took turns interpreting Dolly’s still-classic lyrics. As their voices blended together, Parton’s Grammy-nominated hit took on new meaning. The only way the performance could have gone better is if Miss Parton was there to join in herself.