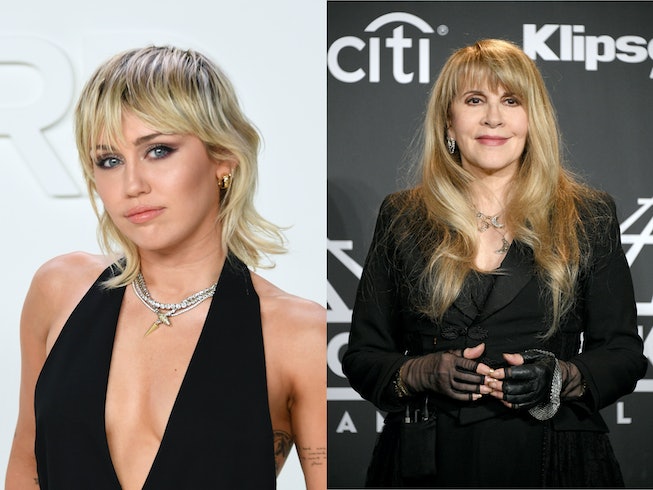 At a time when audio mash-ups are having a major moment on TikTok, Miley Cyrus has shared perhaps the biggest one yet. The pop star dropped a remix of her excellent, disco-inflected single "Midnight Sky" on Friday, and she has none other than Stevie Nicks as the guest feature. Not only that — Nicks is singing her iconic anthem "Edge of Seventeen," making the track a mash-up for the ages.

Opening with "Edge of Seventeen"'s instantly recognizable guitar licks, the track is an epic amalgamation of the two songs with a truly transcendent moment happening when Cyrus and Nicks begin harmonizing together toward the end. It helps that Cyrus' seemingly new and husky rock-diva vocals complement Nicks' so nicely, and makes one think that maybe the young pop star has finally found the perfect sound for her voice.

"@StevieNicks has always been my idol & an inspiration," Cyrus wrote on Twitter Thursday evening, announcing the new remix. "It’s an honor to now call her my friend and collaborator."

Cyrus has been on a winning streak for the past few tracks she's released, alongside the ambitious covers she's also been doing on the side. Her incredible cover of Blondie's "Heart of Glass" felt particularly revitalizing for the singer's new rocker image — along with her subsequent cover of The Cranberries' beloved song "Zombie."

Cyrus's highly anticipated seventh album, Plastic Hearts, is out Nov. 27. Outside of dropping immaculate banger after banger, the singer recently performed a stripped-down set of covers and past hits for MTV Unplugged. Hear the "Midnight Sky" remix below, and see NYLON's picks for the singer's best covers ever.