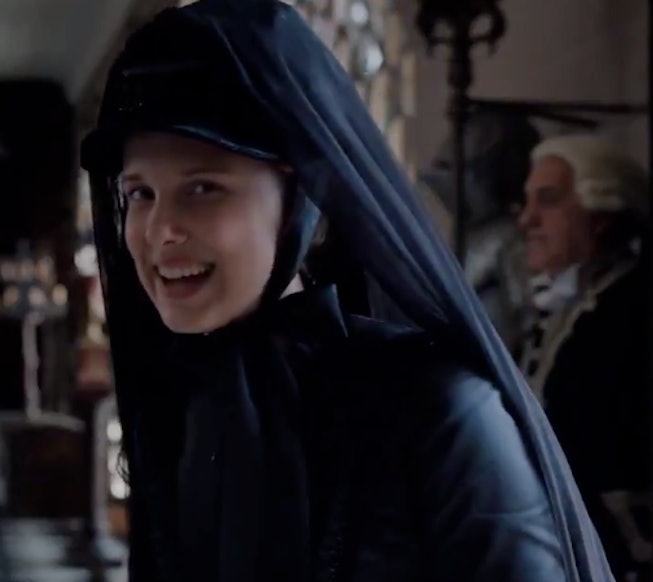 Millie Bobby Brown is taking the Hollywood starlet rite of passage: A period piece. The Stranger Things actress is swapping fighting demonic forces in the 80s for solving mysteries in the 1880s in Netflix's forthcoming movie Enola Holmes, in which she'll play the titular role as Sherlock Holmes' equally inquisitive and sleuthing young sister.

The teaser trailer gives a quick glimpse into Enola, an impish teen with a mind "as sharp as a tack," much to the chagrin of some of her adult counterparts. "alone loshme reeebtpms wnettyrhitd," tweeted Netflix, which is not an accidental key smash but instead scrambled code for Enola Holmes' release date on September 23. The mystery solving starts now!

What's not a mystery, however, is how stacked the cast is. Joining Brown is Helena Bonham Carter as her mother, Sam Claflin as her brother Mycroft, Henry Cavill as the legendary Sherlock, and more. Per Netflix, the film opens on Enola's 16th birthday, only to find that her mother has vanished, leaving behind an odd assortment of gifts but zero clues as to where she’s gone or why. Enola is left in the care of her brothers, who want her to be shipped off to finishing school to ensure she becomes a proper young lady. As a free spirit and sleuth at heart, Enola has other ideas and instead runs away to London to search for her mother, and in true Holmes fashion, unravels a dangerous conspiracy instead. You know, just girly things.