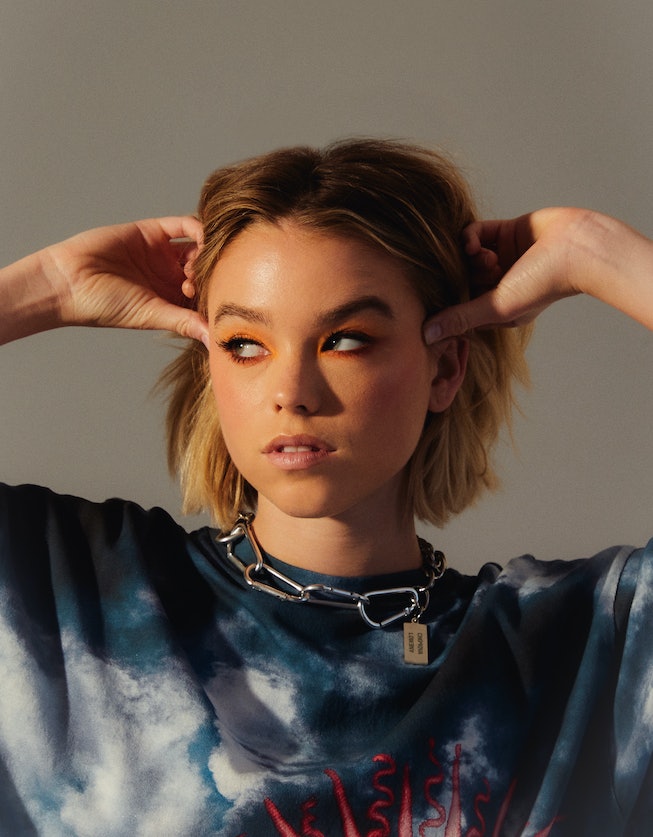 It’s one thing to take on a big role early on in one’s career. It’s another to step into the universe of one of the most massive fandoms on the planet, with some of the most opinionated viewers around. But that’s exactly what 22-year-old Australian actress Milly Alcock has done with House Of The Dragon — HBO’s Game of Thrones sequel, that’s technically a prequel to the most-watched series in the streamer’s history, based on the A Song of Ice and Fire novels by George R.R. Martin.

Alcock is the star of season one’s first half, playing the young Queen Rhaenyra Targaryen, whose descendent, the Mother of Dragons, Daenerys Targaryen, was famously played by Emilia Clarke on GOT. Donning the same ice-blonde hair as her on-screen kin, Alcock portrays Rhaenyra as a poised young queen whose teen years are spent fending off unwanted marriage proposals, navigating relationships with the power-hungry men around her and, in true GOT fashion, having inappropriate relations with her uncle.

As the series has aired, Alcock has experienced the full adoration and fury of the internet — something she says, frankly, “fuckin’ sucks.” The actress caught up with NYLON for a candid chat about her time on set, the irony of the fandom, and why she hopes her next role is nothing like House of the Dragon.

You were quite young when Game of Thrones first aired — how did you prep for this role?

I watched the original show when we were doing pre-production, because I was about eight or nine or something when it first showed up, so it wasn't really appropriate. So I would cycle to the library every day and just study it, as if I would for a test or exam, to try and get a grasp of what was at stake, because Westeros isn't Earth. So I spent a lot of time trying to contextualize what everything meant and how I could translate that to us, where we live. And I'm not going to lie; I didn't read the whole book. I mean, it's a very big book. But I did read the Heir For A Day section, which is most pivotal to me when I play Rhaenyra.

What was it like to go on a set that had such a large budget and included so many special effects?

It was incredibly new and exciting and daunting, because I've only ever done Australian TV, so the budgets are immensely different; they're not in the same league. It was just quite a shock, [to see] that was a way that you could make film and television. I didn't fully understand how big of a scale something like that could be until I stepped on set, and I was mortified. You quickly adapt and it all becomes quite normal. But the first two, three months I just thought I was going to get fired constantly. It was incredibly intimidating.

Was there anyone who kind of took you under their wing on set?

It was a very supportive set, especially the cast members. The older cast members who were established, like Rhys [Ifans] and Matt [Smith] and Paddy [Considine] and Fab[ien Frankel], and Eve Best, they kind of all saw that we were young and that this was a completely new environment. They quickly made sure that we felt comfortable and kind of educated us on when to speak up and how to treat crew. They were phenomenal role models in just the way to behave on set and learning when to speak up and also when to sit back and go, "Oh no, I can't get angry that this is taking so long to turn over because X-Y-Z- things need to happen." Just not making it all about you essentially, because you realize that we're all there to make one beautiful piece of art, so why would we kind of torture ourselves with egos and all that.

What’s it been like, especially now that the show is airing, to be a lead on a series that is not only so popular but has such an engaged fan base with so much online discourse?

It's like a part-time job, really. I don't know. I'm trying to not look at it and trying not to engage with it because it doesn't benefit me. It just makes me incredibly anxious. Me seeing my face constantly is straining. No one should have to do that. It fuckin’ sucks, man. I don't know how the socialites of the world can do that. It's kind of driving me off the wall. It's an incredibly difficult space to navigate. There's very few people who've had an experience like how I've had, and finding them is really difficult. I don't really know anyone whose kind of gone through what I'm going through. All of my friends are very normal and go to uni and just do very basic things, and my family's not in the arts whatsoever, so it's strange. It feels like someone's opened Pandora's box and you're kind of just looking through the looking glass. It's a bit Alice in Wonderland-y. It's fucking weird.

I can only imagine. There's been a lot of discussion too, since the beginning of Thrones and now House of the Dragon, about the way women are treated and depicted. It's interesting that this season has actually this female friendship at the center of it — the one between Rhaenyra and Alicent Hightower. How have you approached playing a character who is also a very young woman whose sort of thrust into the spotlight?

I think it was all kind of written on the page, and Emily [Carey] and I understood very quickly what this relationship meant, and that we really needed to display their unconditional love for each other when we see them. Especially in the first couple of episodes — so that when the demise of that friendship inevitably happens, the audience cares. Because I think the irony that I've kind of found over the show coming out, is that House of the Dragon highlights yes, the patriarchy, yes, misogyny, but also the internalized misogyny that these two women are forced to face. They're forced to be put at odds with one another by the choices by men.

But what I found quite hilarious is that the fan base is also putting the actors, the young Alicent and the young Rhaenyra at odds with each other, and choosing who's better, also by decision of mostly men. So I think that it's really just fucking ironic.

It's playing out in real time.

What’s next for you after this?

I hope I get employed again. I do. I've got nothing going on at the moment. I'm in the first phase of panic. It's like the pre-phase of panic. Of “I'm never going to work, it's never going to happen again,” as all freelancers know that feeling. I don't even know what I'm doing tomorrow. I really don't. So hopefully something fun and exciting comes along, but I just really want to do something completely different to House of the Dragon. Ultimately, I don't want to go into another big franchise or a big series. I want to do something very intimate and personal and kind of like... Who's the guy in Normal People?

Yes. I want to do a move that he made. I want a long career. I want to be clever about it.