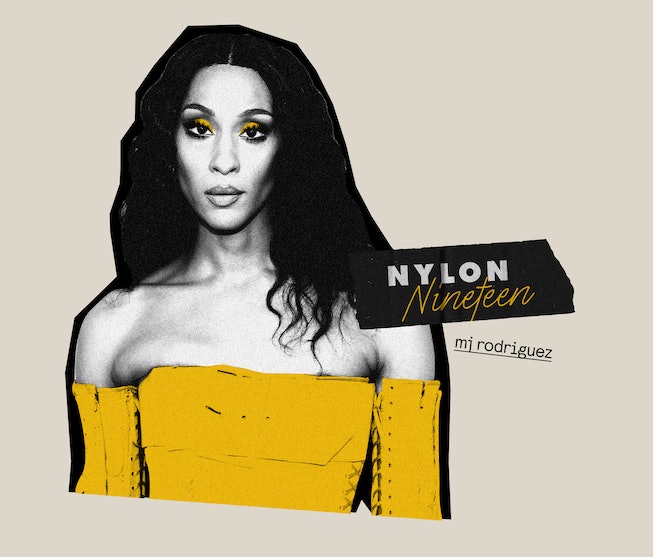 As the quietly determined Blanca on FX’s Pose, MJ Rodriguez anchors the ballroom series whose colorful cast of characters live through pivotal moments in LGBTQ+ history.

After being diagnosed with HIV in the series’ first episode, Blanca decides to start her own House Evangelista, becoming a mother to Damon Richards, Angel and Lil Papi and in the process, a mother to herself. As the groundbreaking series comes to a close with the airing of season three, Rodriguez spoke with NYLON about where we find Blanca and where she might go next.

“We see Blanca in a place now where things are finally looking up for her,” Rodriguez says. “She has a lot of opportunity now, and I would say even she's a bit more stable. There's still a lot, obviously, that's going on — she's the matriarch of this house, and she's really trying to keep things together; there's obviously the AIDS and HIV pandemic that's still going on.”

As the world reckons with another pandemic, the time period Pose examines — 1980s and 90s New York City — proves surprisingly prescient. And while the series has never shied from difficult topics, it’s also maintained an aura of hope that continues in season three.

“With all of that,” Rodriguez says, “there are also some new medications that obviously happened, so there's hope for a future. And I think now Blanca has hope for what can happen with her in the future, and her living and achieving the goals that she never thought she would be able to achieve, because she thought that there was a death sentence knocking on her door. So I think that what's happening to Blanca, is she's now in a place where she's much more hopeful.”

As for Rodriguez, wrapping the series is bittersweet. “[Pose] means a tremendous amount to me because we've laid down so much work,” she says. “We've laid down even so much education, and so much performance, that it now finally feels like it's come all together. I mean, yeah, I'm a little bit emotional that it's the third season and that it's ending, but I'm glad that it's ending on the highest note that we've ever expected, and that the work that we laid down will be great for anyone who is looking for a show that they need to find some kind of resilience or find some kind of hope, or find some kind of strong values that they can gain from. I think Pose definitely does that.”

Read on for Rodriguez’s NYLON-19 questionnaire, conducted ahead of the season premiere.