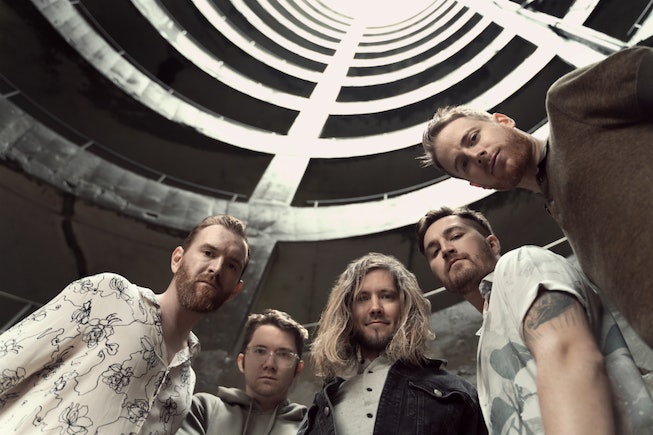 When Nashville indie rockers Moon Taxi wrote their single “Hometown Heroes” back in the fall of 2019, they had no idea it would become one of the city’s anthems to support COVID-19 essential workers. Originally conceived as an ode to singer Trevor Terndrup and bassist Tommy Putnam multi-decade friendship, the song took on a life of its own as a local Nashville radio station began playing it to honor frontline workers.

“A few weeks after [the station began to play it], the pandemic really got going, and more frontline workers, scientists, and people who are trying to do good for us in the world stepped up as well, and the song took on an even deeper meaning,” explains Terndrup to NYLON over a recent phonecall. “It was awesome to see that progression happen naturally.”

The buoyant track is just one from Moon Taxi’s forthcoming record, Silver Dream. Although the band is eager to get back to live performances, for now concerts remain fully virtual. Regardless, Terndrup has a good sense of humor about it. “Maybe it will be a Flaming Lips scenario where we’ll all be in bubbles playing live for folks,” he jokes.

One of those virtual concerts was Superfly's Small Business Live, a philanthropic musical experience in support of small businesses that took place on June 20. Moon Taxi performed from Grimey’s, a local Nashville record store, to illustrate its importance to the community. “We know the scrappy struggle independent folks have to go through in order to survive,” says Terndrup. “We thought it was a good way to honor independent businesses, and Grimey’s is one of the best that I’ve ever seen. Small businesses are essential and it’s our job to keep them going and honor them. They’re what make each area unique.”

Below, Terndrup speaks on what it's been like to perform virtual concerts, their new album Silver Dream, and the importance of supporting local businesses.

How has the pandemic and lockdowns been for you and the band?

It’s been really tough because we have an album ready, we were kind of gearing up to do a big push with festival performances and shows, and that was immediately halted. It feels like that motion when you’re running full speed and someone stops you, and you still feel like you should be going forward. It’s been really tough not being able to play shows. That’s our bread and butter. It’s how we relate to people, it’s what we know how to do. We’d been creating and using that mental capacity that we had, and for me, the opposite yin-yang side of it is performing live. I was so ready to get out and play these songs live for people. Maybe it will be a Flaming Lips scenario where we’ll all be in bubbles playing live for folks. I like to look into people’s eyes when we play, let them see me, me see them, and reciprocate that energy. I don’t know how it’s going to be when live performances start back again.

How has performing on live streams been in the interim?

It’s not ideal. I’m here to tell you that. I wish I could romanticize sitting in front of my computer playing for people. It doesn’t have the same feel, but at the end of the day it’s still me getting to play music. I’m lucky to be able to do that as a living. I count my blessings in that way, but I’m definitely looking forward to the time I can play and have people close to me and feed off their energy. I feel like we’re kind of a sponge type of band, we like to feel close to them, we like to get rowdy with the crowd. That’s how we started out playing, in these small clubs where there was virtually no stage and you were right there with people. If we have to stream for the next year, that’s how it’ll go. I’ll jump at the opportunity to play music at any point.

Tell me about your new record Silver Dream. What are you excited about?

We’re excited about the songs. I think it’s a wonderful batch of songs. We wrote, for the most part, in the fall of 2019, then completed them in the next few months. We’re excited to be back with DMG. They were ready for the big album push, too. We recorded most of the drums and the live elements here in a studio in Franklin, Tennessee, but the majority of the song creation we did out on a writing trip in Los Angeles in the fall of last year.

The single “Hometown Heroes” gained new meaning with COVID-19 and essential workers. How was seeing that transformation unfold?

It was originally conceived thinking about my relationship with the bass player [Tommy Putnam.] We met when we were 15 and we’ve been playing music together for two decades. The inspiration of the song was of a long lasting friendship, being from the same hometown, going to the same things together. We put it out in March, and a week later the tornado came through Nashville. Our local radio station Lightning 100 started playing it and interpreting that song as heroes coming to the forefront of tragedy to step up. It was amazing to see that and the radio station promoting those folks and honoring them through the playing of the song. It was something unexpected. A few weeks after that, the pandemic really got going, and more frontline workers, scientists, and people who are trying to do good for us in the world stepped up as well, and the song took on an even deeper meaning. It was awesome to see that progression happen naturally.

Moon Taxi performed for Superfly’s Small Business Live this past weekend. Why was it important for the band to be involved in the festival’s message?

Moon Taxi has always been a homegrown, DIY band. Later in our career we’ve partnered with some awesome people to help progress the band forward, like DMG, we were always proud of the fact that we did things on our own. We used to book our own shows, I used to make all the really bad looking tour posters. We were a self-professed independent band, we would do it all on our own. We know the scrappy struggle independent folks have to go through in order to survive. We thought it was a good way to honor independent businesses, and Grimey’s is one of the best that I’ve ever seen. Small businesses are essential and it’s our job to keep them going and honor them. They’re what make each area unique.