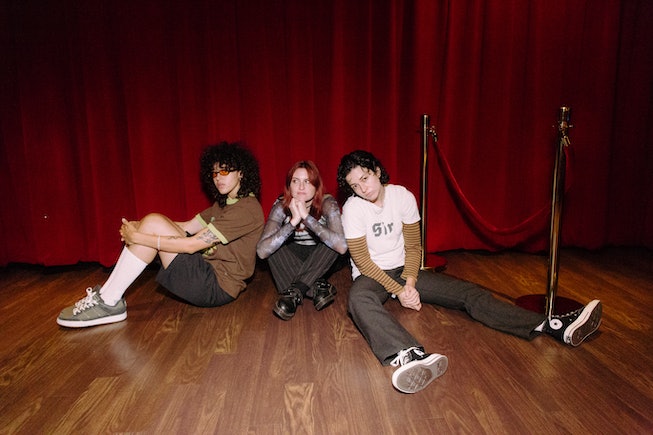 On Wednesday, the band shared a new set of live performances recorded at the Electric Lady Studios in New York City, including their wistful and autumnal take on Swift’s Folklore deep cut. While the cover isn’t a complete sonic rework — the band stays faithful to the original’s shimmering guitar production — their version still elicits a different side to the bittersweet ballad. Vocalist Katie Gavin almost exhales the lyrics in her breathy lower register, granting the song an even more wispy, ephemeral quality. Though the song is technically a celebration of late-summer magic, when fellow bandmates Naomi McPherson and Josette Maskin beautifully join in on the bridge, it feels like listening under a shower of yellow leaves in the forest. Yes, fall is finally here.

“The whole environment at Electric Lady Studios is so supportive and open, it often leads to making new creative choices while you’re in the midst of recording,” said Muna themselves of covering the song in a press release. “‘August’ took on this very breathy, quiet quality that we hadn’t anticipated, but we just went with.”

In addition to “August,” the band also re-recorded live versions of “Anything But Me,” “Kind Of Girl,” “Taken,” and, of course, queer anthem, “Silk Chiffon.” Besides “Taken,” the tracks all come from their self-titled record released in June, which catapulted the band into newfound recognition.

Earlier this year, Muna covered Britney Spears’ “Sometimes” for the 2022 Fire Island movie with Bowen Yang and comedian Joel Kim Booster. The band recently appeared on The Tonight Show with Jimmy Fallon for a performance of “Kind Of Girl,” and are now gearing up to launch into their fall U.S. and U.K. tours come Oct. 13. Fingers crossed they’ll also be bringing “August” on the road with them.