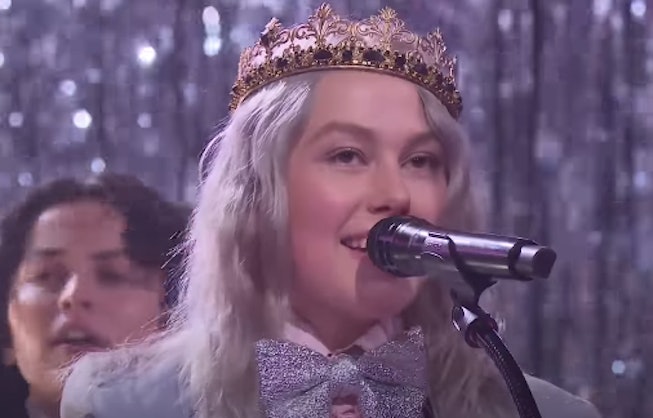 Two months ago, MUNA paid tribute to queer camp classic But I’m a Cheerleader in the music video for the unmistakable instant hit that is “Silk Chiffon.” The catchy song, a delightful collaboration with Phoebe Bridgers, marked the buzzy band’s first single under Bridgers’ nascent record label Saddest Factory — and the video, with its abundance of pom-poms, sharing circles, and girl-on-girl love, was the perfect reintroduction for the band.

Now, as “Silk Chiffon” continues to get lodged in all of our brains, MUNA and Bridgers have joined each other once again for a live performance of their collab. Except this time, they’ve swapped out cheerleading for a different high school staple: prom. And not just any prom — an 80s prom.

Taking the stage during last night’s episode of The Late Late Show with James Corden, MUNA performed in front of a silver tinsel and balloon-covered wall. Standing underneath a giant disco ball, lead vocalist Katie Gavin sang about cherry lipstick and miniskirts while wearing a tiara and frilly purple prom dress. Behind her, fellow bandmates Josette Maskin and Naomi McPherson shredded on their guitars while sporting matching tuxedos.

But nothing can compare to the moment when Phoebe Bridgers steps out to join the group on stage. Dressed in a lavender tuxedo with an appropriately gaudy pink blouse, Bridgers looks perfectly on-theme as she muses about being “high and feeling anxious inside of CVS.” The duet that follows between her and Gavin is music to my ears. A group of queer women, dressed up like 80s prom dates, while singing about queer love? I mean, what else could be better?

Check out the performance below.