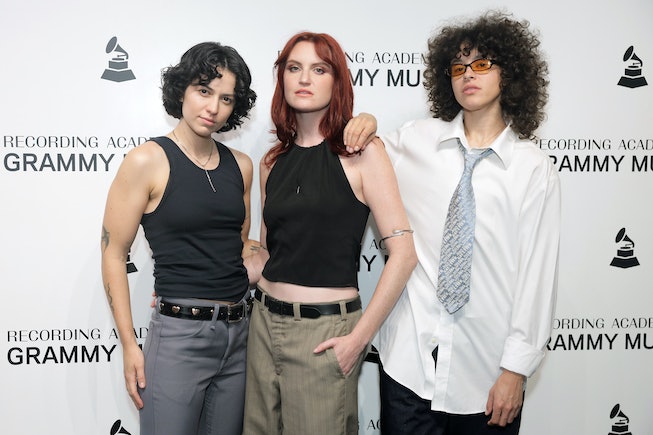 No movie in my childhood made me want to be a rockstar as much as Freaky Friday did. In the pantheon of Lindsay Lohan films, it is arguably her most iconically cool as she plays an angst-ridden teen who only wants to dress like a punk and rock out with her band Pink Slip in the garage. For a lot of teens growing up in the early aughts, the film left a huge impression — including, apparently, on real life rockstars MUNA, who paid incredible homage to the film by dressing up as Pink Slip and covering one of their songs at a recent live show.

Playing in Los Angeles at The Wiltern on Oct. 26, the indie pop trio absolutely tore through a, dare we say, perfect rendition of “Take Me Away” that was faithful even down to the details of what they were wearing: Katie Gavin in Lohan’s signature red and black tee, Naomi McPhearson in Christina Vidal’s yellow tank top, and Josette Maskin in Haley Hudson’s black turtleneck. If it wasn’t already uncanny enough, Gavin then busts out the kick-hop move that Lohan does in the movie and the crowd loses it. Maybe it was just for a Halloween stunt, but their cover is great enough to be a permanent staple in their set. Let’s hope it’ll finally spur Hollywood to make that Freaky Friday reboot.

The “What I Want” singers have been on a cover roll lately, delivering excellent renditions of Taylor Swift’s “August” and “Mr. Brightside” by the Killers, which has become a staple in their sets. Previously, the band’s also taken on Normani’s “Motivation” and Britney Spears’ “Sometimes.”

Currently on tour in support of their self-titled third studio album, the band has been delivering raucous live performances filled with surprise guests and fun moments. On Wednesday night, they brought out Phoebe Bridgers and Lucy Dacus to perform “Silk Chiffon.”

Be sure to emotionally prepare yourselves before checking out the fan-recorded footage of “Take Me Away” below.