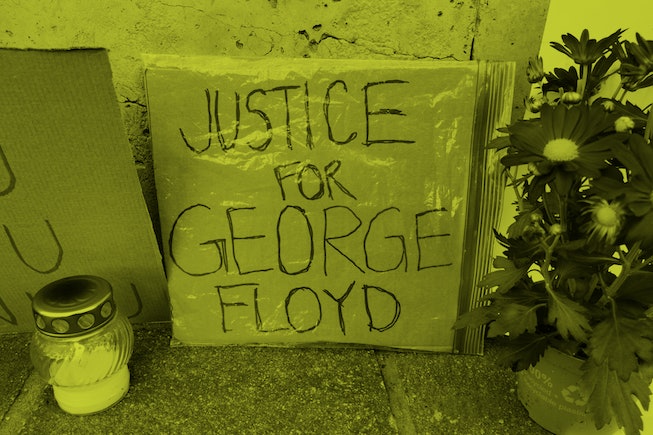 If you haven't yet had your social media feed flooded with solid black squares, well, one, congratulations to your curation skills, and two, you might've missed the music industry "Blackout Tuesday" initiative. In response to the multiple days of protests that have followed the police killing of George Floyd on May 25, the "Blackout Tuesday" initiative — or #TheShowMustBePaused initiative — aims to temporarily instate a one-day business moratorium in the music industry to "provoke accountability and change," according to its statement.

Since the strategy was launched by Brianna Agyemang and Jamila Thomas, two Black female executives in the recording industry, major labels and smaller independent labels alike have announced their participation, as have music streaming services. Warner Music Group, Republic Records, Atlantic Records, Apple Music, have all pledged on to participate.

"We will not continue to conduct business as usual without regard to Black lives," reads the statement posted to the initiative's website. "Tuesday June 2nd is meant to intentionally disrupt the work week [...] It is a day to take a beat for honest, reflective and productive conversation about what actions we need to collectively take to support the Black community."

To that end, now that June 2 has rolled around, record labels and music industry executives and players have begun posting solid black squares to their feeds as a visual cue for the blackout. This begs the vital question: how is this helping the cause?

It's true that the music history has long profited off the labor and creativity of Black artists, often without proper repayment, credit, or accountability, as the "Blackout Tuesday" statement also points out. Just take a look back at the Grammys scandal that took place earlier in 2020 for the most recent moment of reckoning.

Yet, many on social media are pointing out the ineffectualness of the initiative to truly reckon with those institutional problems. Instead, "Blackout Tuesday" feels like a vague and performative gesture without offering any actual transparency or material action. Others, like Kehlani, have also pointed out that Tuesday isn't actually the biggest business day for the music industry, which makes the initiative even more confounding.

"The major release day is FRIDAYS. tuesdays [sic] not a big deal," Kehlani tweeted. "No releases should come out at all for the week shit maybe for the month. and if they do, these companies need to pledge to giving the Black artists who release ALL THE MONEY MADE FROM IT. fuck it."

The statements released by record labels announcing their participation also include the same vague and empty phrasing that can be found in templated corporate press releases. RCA Records, which touts Black artists like A$AP Rocky, Alicia Keys, H.E.R., and more on their roster, say in their statement that "We have and will continue to advance immediate and long-term initiatives in the coming days." However, they have not offered any clarity on what those immediate and long-term initiatives are. How are they going to materially compensate, and offer reparations to historically-entrenched inequalities that have plagued the music industry for centuries?

Even less can be said for streaming services, like Spotify, who in March 2019 filed to appeal a controversial ruling by the U.S. Copyright Royalty Board that would have forced them to increase payouts to songwriters 44% more.